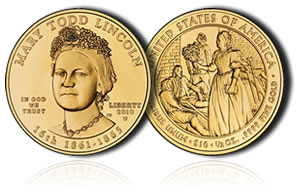 Both gold coins launched December 2, and as expected were a bit more popular initially when compared against other recent issues in the one half ounce, 24-karat gold coin series. The US Mint anticipated higher demand and said it would release up to 20,000 across both options, a higher mintage than the other 2010 First Spouse Gold Coins.

What made Mary Todd’s coin more popular was the fact that it was a "Lincoln Coin." For a long time, collectors have sought strikes pertaining to the popular sixteenth President, Abraham Lincoln. Mary was his wife, and this particular coin made a nice addition to a collector’s Lincoln set. It also followed the release of the Abraham Lincoln Presidential dollar by only a few weeks.

Mary Todd Lincoln First Spouse Gold Coins had debut sales of 1,870 for the uncirculated and 3,635 for the proof. Demand eased slightly over the weeks and could have been attributed to its competition with the popular James Buchanan coins or to the high price of gold. At the time of their release, the coins were selling at $841 for the uncirculated and $854 for the proof. Prices went up from there as gold pushed higher.

The move to the Mint’s online "No Longer Available" page seemed early for the uncirculated coin, since only 3,760 had sold as of Sunday, May 29. The uncirculated are, after all, only at 18% of the the possible 20,000 maximum mintage. The combined total across both options was at 10,004 or 49% .

Early sell outs, though, have been common as of late. The United States Mint took the Abigail Fillmore, Jane Pierce, and Buchanan’s Liberty First Spouse Gold Coins off the market before they came close to their allowed mintage. And they did so in under a year’s time. Traditionally, sales for one design had lasted for about one year.

The only issues that reached their actual authorized mintage limits were Martha Washington, Abigail Adams, and Thomas Jefferson’s Liberty First Spouse Gold Coins. Collectors scooped up 20,000 of each of the proof and uncirculated versions in mere weeks.

Mary Todd Lincoln coins are the seventeenth in the First Spouse Gold Coin series and minted at West Point. On the obverse side is a forward facing portrait of the First Lady. It was designed and sculpted by Phebe Hemphill. The reverse side featured Mary giving flowers and books to wounded Union soldiers during the Civil War. It was designed by Joel Iskowitz and sculpted by Phebe Hemphill.

As for currently available coins in the series, the US Mint is currently offering just three. They are the 2010 Mary Todd Lincoln Proof Coin, the 2011 Eliza Johnson Proof Coin, and the 2011 Eliza Johnson Uncirculated Coin. The proofs are priced at $929.00 and the uncirculated at $916.00. Prices are subject to change each Wednesday, based the Mint’s gold numismatic pricing policy.

Also still available are the Abraham Lincoln Presidential $1 Coin & First Spouse Medal Set as well as the Mary Todd Lincoln bronze medal. Orders may be placed at http://www.usmint.gov/ or by phone at 1-800-USA-MINT (872-6468).

The United States Mint will be releasing three more designs this year. The next coins will honor Julia Grant and will be made available on Thursday, June 23.