The US Mint on Tuesday said the pricing for the numismatic Hot Springs National Park 5 oz Silver Uncirculated Coin would be set at $279.95. The coin will launch on April 28. 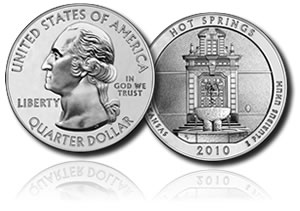 The price is the preliminary amount to place on the other 2010 and 2011 America the Beautiful Silver Uncirculated Coins, although the Mint explicitly states its coin pricing is subject to change. Given the volatile and rapid rate of silver’s climb in 2010 and 2011, it would seem chances for future price adjustments may be more probable than not.

At $279.95 and using the current silver spot price of $40.05 an ounce, the 5 oz, .999 fine silver Hot Springs coin  has a melt value of $200.25, representing a premium of $79.70, or 39.8 percent. A clear example of how the coin’s intrinsic value can change significantly in such a short time is noting the London silver fix price on Monday at $41.37 an ounce, which is likely closer to when the Mint set pricing. The Hot Springs coin’s premium based on Monday’s silver pricing would be $71.10, or 35.3 percent. Going back further, silver was at $28.74 an ounce when the US Mint first announced in December that it would offer the uncirculated coins. Collectors would certainly be happier with pricing based on that level, but obviously none of the issues made it out last year.

As an uncirculated numismatic piece, the true value of the Hot Springs 5 oz Silver Uncirculated Coin is driven to a greater degree by its limited availability and desirability to coin collectors. The US Mint has said the Hot Springs issue has a mintage of 27,000. While demand was expected to be fierce for the coins, the pricing is sure to dissuade some buyers.

Unlike the Hot Springs bullion version which was sold to the Mint’s network of distributors in December, buyers will be able to purchase the uncirculated coin directly from the Mint on April 28 at noon ET.

The coin has an uncirculated brilliant finish, bears the Philadelphia ("P") mint mark, and comes encapsulated within a plastic presentation case that is accompanied with a Certificate of Authenticity. The four remaining 2010-dated issues are expected to be released in staggered intervals later this year. Those and the 2011 issues currently have a "TBD," or To Be Determined date in the Mint’s product schedule.

On April 28 with the release on this 5 oz Silver Uncirculated Coin, the US Mint will be unleashing what will come to be known as the worst disaster in The US Mint History (the ultimate Frankenstein monster and everything that goes with it) In my opinion in the best interest of the Mint as well as the tens of thousands of collectors, the mint should simply forgo the release of this numismatic 5 coin collector series and cancel its release all together because of the availability of only 27,000 possibilities. It wouldn’t be the first time the mint has… Read more »

So, What will be the difference in these and the one’s that we’re released to the AP’S earlier. They we’re BU Coins. Will these be Proofs?
Also, I would rather see a 5 Oz. Silver Eagle Proof……….

These have a mint mark.

Where are the AP’s, the Heavyweight buyers ?

Since the cost to AP’s on the last 5 medals, oops coins, were below $950 where the justice ?

Guess no ordinary collector will get the MS 68/69’s, they WILL be culled out to be “slabbed”. What excitement , a mintmark !

No thanx, I’ll pass on this one too !