Demand for 22-karat American Gold Eagle coins retreated in March, but the United States Mint still sold more ounces of gold bullion coins during the month than in February or during the same period last year. Fewer ounces were sold than in January, however. 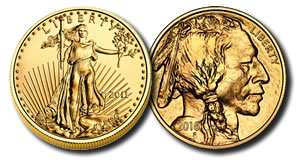 US Mint Authorized Purchasers (AP’s) ordered 115,000 ounces of gold bullion coins last month. That was better than the 92,500 ounces purchased during the previous month and the 102,000 ounces from March of last year. The month pulled ahead due to the addition of the 24-karat American Gold Buffalo bullion coin which was released on March 14. (Read 2011 Gold Buffalo Bullion Coin Debuts.)

Gold Eagles are available in four sizes. The Buffalo Gold is available in one size. The following table of bullion coin sales highlights how many of each were purchased.

The Gold Eagle bullion coin has been produced by the US Mint since 1986. In terms of their historic sales, last month ranks as the sixth best March of all time.

Despite the addition of the Buffalo, last month’s sales total came well under the 133,500 ounces of gold the US Mint delivered in January.

American Gold Eagle bullion coins are different than the numismatic counterparts that coin collectors most prefer. All Gold Eagles are composed of .9167 fine gold and feature the same designs on the obverse and reverse. However, unlike the collector versions, the investment-grade bullion coins are not sold directly by the US Mint to the public, they do not feature the collector proof or uncirculated finishes, and they do not bear the West Point “W” mint mark (although they are all produced there).

This site’s bullion coins section offers information on US and World bullion offerings from government mints.