US Mint circulating coin production levels in February 2011 retreated significantly from those of the previous month, but they were substantially higher than totals from February 2010. The latest US Mint figures also reveal the scarcest mintages for an Andrew Johnson Presidential Dollar and the Gettysburg National Military Park Quarters. 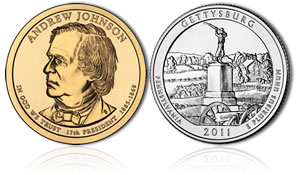 The US Mint produced 523.14 million coins for circulation in February 2011, capping a year-to-date total of nearly 1.288 billion coins. That is already more than one-third the level attained in all of 2009 when coin production plunged due to the American recession. The United States Mint’s pace for the month was 169.1 percent quicker than a year ago when just 194.4 million coins were produced for daily commerce.

However, February 2011 marked a 31.6 percent decline from January when mintages reached their third best as compared to the past 12 months. In fact, last month ranked ninth over the same time period as the following table highlights:

Coins that are minted for circulation are struck at the US Mint facilities in Denver and Philadelphia. As is nearly always the case, Lincoln cent production dominated both facilities. Philadelphia was far busier than Denver in combined output, swapping their positions from January when Denver had struck more than two coins for every one at Philadelphia.

Although the US Mint reported no increases for Presidential Dollars, it did call the final Andrew Johnson Presidential Dollar mintages. The coins were released into circulation beginning on February 17, and have the lowest combined total, at 72.66 million, than any other Presidential Dollar since the series debuted in 2007. The 2011-P Johnson is the scarcest dollar coin of all at 35.56 million. The 2011-D Johnson Dollar at 37.1 million falls behind:

As mentioned, the debut Gettysburg National Military Park Quarter mintages were provided as well. The Gettysburg quarters are easily the scarcest of any quarter produced for circulation in decades. It should be noted, however, that these numbers have the potential to increase since the US Mint has a bulk purchase program in place that permits businesses to buy past quarter designs for a year even when it has stopped delivering them to Federal Reserve Banks.

Since the US Mint total coin output for quarters is higher than those shown for the Gettysburg quarter, it can be assumed that the bureau is already producing the Glacier National Park Quarter which is scheduled to be released through Federal Reserve Banks on April 4, 2011.