The United States Mint wants your help, according to a press release it issued Monday. 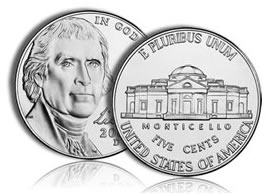 The US Mint is seeking input from interested parties on what it should consider as it moves ahead in its Congressionally mandated look into alternative metals for use in the production of circulating coinage.

Congress ordered the review under the Coin Modernization, Oversight, and Continuity Act of 2010 (Public Law 111-302) which was signed into law by President Barack Obama on December 14, 2010.

The Act requires the Treasury Secretary (and by extension the US Mint) to create a report within two years that addresses the production costs of each circulating coin, as well as the cost trend. It further directs that detailed recommendations must be provided on any possible changes in metallic content of the coins that could positively affect those costs.

However, in the press release, the Mint states that at this time it is not soliciting in any specific metallic recommendations, only the factors that it should include in considering them. According to the US Mint:

“These factors include, but are not limited to, the effect of new metallic coinage materials on the current suppliers of coinage materials; the acceptability of new metallic coinage materials, including physical, chemical, metallurgical and technical characteristics; metallic material, fabrication, minting, and distribution costs; metallic material availability and sources of raw metals; coinability; durability; sorting, handling, packaging and vending machines; appearance; risks to the environment and public safety; resistance to counterfeiting; commercial and public acceptance; and any other factors considered to be appropriate and in the public interest.”

The US Mint is constrained in its final recommendations to Congress by several terms outlined in the previously mentioned Coin Modernization Act. This includes the consideration of how a change would impact current US Mint metal suppliers as well as how coinage containing a different metallic content would be introduced and accepted for use in everyday commerce, including vending machine use, banks and even American-owned manufacturers of commercial coin processing equipment.

Public comments must be submitted on or before April 4, 2011. Interested parties may submit written comments by any of the following methods:

The steps the United States Mint has undertaken to create this report are just the first in what will likely be a long process before the report is due in late 2012. However, it does establish a process which will likely be followed in the coming years as it continues to research the matter and offer recommendations to Congress.

How about a 21st century version of the Resumption Act? We don’t need to go back to circulating gold coins, but that shouldn’t preclude a requirement that the dollar have parity with the metal. Its current official value is $42.22 per troy ounce. Restoring the value of our circulating coinage would help a lot more than finding ever cheaper alternatives of production. Why must we all be passive acceptors of inflation? They say deflation is bad, but how can it be really? If deflation were say, 3-5% a year, would anyone really put off buying groceries, making needed home repairs,… Read more »

I sent in an old 1963 $2 bill to the Treasury for redemption because part of it was eaten away by something so I could not sell it nor redeem it at a bank. That was back in August. I have yet to see the check from the Mutilated Currency Redemtion center. I know it is only $2, but should I give up? Also, I feel that it is painfully necessary to have steel nickels and cents because it could potentially help the United States steel industry, that is, if we buy the planchets in the U.S. (I hope). I… Read more »

I’m no fan of fiat money either but unless someone can figure out a way to re-regulate the price of gold, any attempt at requiring parity would be impossible. Unfortunately that genie started slipping out of the bottle in 1933 and escaped completely when gold and silver were allowed to float freely.

It wouldn’t necessarily have to be true parity. It could be a more modern “flexible parity”, say for the sake of argument: $42.22/tr.oz. ±5% to allow for emergencies and whatnot.

I finally received a check from the BEP for the mutilated 1963 $2 bill.
I am wondering, will clad coins be treated the way we treated silver coins in the 1970’s when people pulled them out of circulation as we change to steel coins? Will people being buying copper by the ounce, too, 10 years from the day steel coins are introduced? I still feel we shoud use United States steel since it will help the industry and the change in change will be inevitable.