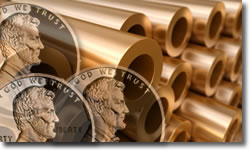 The newly introduced bill is not a new concept. A similar bill received attention late last year. The ‘Coin Modernization and Taxpayer Savings Act of 2007‘ failed to get through the gates when a mini firestorm erupted. Mostly because the bill contained more than what its name implied – a provision that would allow citizens to melt pennies.

Not hidden from an objective of the 2007 bill was the fact that the representative who introduced it, Congressman Zack Space, had a constituent who owned a company that melted pennies. The ban was hurting his business and, unlike the government, he and Mr. Space believed taxpayers would save money in melting pennies.

In the end, a hearing was scheduled on the matter to discover which facts to go by. It never materialized. The hearing was eventually cancelled and the bill died a sudden death. Until now …

Coin Modernization and Taxpayer Savings Act of 2008: A new bill with a less controversial makeup

The bill, H.R. 5512, bears the same friendly name as the old but with a new year, ‘Coin Modernization and Taxpayer Savings Act of 2008’ . It was introduced February 28 by Mr. Space, who introduced the 2007 version. In this instance, however, the penny melting measure was not included. As such, its passage is certainly more likely given the current climate.

Morley Safer in a recent 60 Minutes video segment asked United States Mint Director Ed Moy why the cost to manufacture the penny and nickel was so high.

“You know, coins are made out of metal. And worldwide demand for copper, nickel and zinc have dramatically increased over the last three years. That’s what’s primarily driving up the cost of making the penny and nickel.”

With the passage of H.R. 5512, Mr. Moy can do something about those costs. Authority would be given to the Secretary of the Treasury, which the U.S. Mint is under, to use less expensive alternative metals to manufacture circulating coins.

Henry M. Paulson, Jr., Secretary of the Treasury, made comments the day after the bill was introduced. In them he relayed his beliefs that the penny should be eliminated. He qualified his statement by going on to say it was not "politically doable."

Mr. Paulson received a fair amount of criticism for his statement from penny continuation advocates. Ironically, should the bill become law, those same advocates could be thankful for Mr. Paulson’s new role in keeping the penny going.

One fact can not be debated. There is little sense in manufacturing coinage that costs more to make than what they are worth. Not if costs can be reduced with little or no financial impact elsewhere.

IN THE HOUSE OF REPRESENTATIVES
February 28, 2008

Mr. SPACE (for himself, Mr. GUTIERREZ, and Mr. FRANK of Massachusetts) introduced the following bill; which was referred to the Committee on Financial Services

This Act may be cited as the `Coin Modernization and Taxpayer Savings Act of 2008′.

(1) International demand along with market speculation for commodity metals has, over the past several years, increased the cost of producing circulating coins in the United States.

(2) In a July 30, 2007, letter to Congress, the Department of the Treasury, with support of the Administration’s Office of Management and Budget, requested that legislation be put forward to authorize the Secretary of the Treasury to make changes to the composition of circulating coins.

(3) The United States Mint has studied alternative metals for use in circulating coins, as noticed in its 2004 annual report.

(4) In 1943, the United States Mint produced zinc-coated steel pennies in response to war-time demands for copper.

(5) The United States Mint gained further experience changing the metal content of pennies in 1982, when it began producing copper-coated zinc pennies as a result of rising copper prices.

(7) Given the current cost to make a penny and volume of pennies minted, by simply reducing penny production costs to face value, the United States will save nearly $600,000,000 dollars in the next 10 years alone.

(8) Removing the statutory language that requires specific weights and content for circulating coins will allow the Secretary of the Treasury to make adjustments to any circulating coin when rising metal prices makes its production costs prohibitive, which will create additional future savings to the government.

(9) Commodity metal prices are often cyclical in nature, and can be inflated by speculation, so it is important that a solid trend in the rising price of a commodity metal be established before any change in the metal content of a coin is made.

(10) Congress has delegated the authority to coin money to the Secretary of the Treasury since 1792.

(11) Congress has additionally delegated authority to the Secretary of the Treasury to determine the composition of some coins.

(13) In Public Law 93-441, Congress gave the Secretary the authority to determine the weights and alloys of the copper and zinc in 1-cent coins.

(a) Weight and Composition of Circulating Coins Determined by the Secretary- Subsection (c) of section 5112 of title 31, United States Code, is amended to read as follows:

`(c) Weight and Composition of Coins-

`(1) IN GENERAL- The Secretary shall prescribe the weight and the composition of the dollar, half dollar, quarter dollar, dime, 5-cent, and 1-cent coins. The coins shall be coined, minted and materials fabricated in the United States.

`(2) FACTORS TO BE CONSIDERED- In prescribing the weight and the composition of the dollar, half dollar, quarter dollar, dime, 5-cent, and 1-cent coins, the Secretary shall consider–

`(A) factors relevant to the potential impact of any revisions to the weight and composition of the material on the current coin suppliers;

`(B) factors relevant to the acceptability of new coinage materials, including the effect on vending machines and commercial coin processing equipment; making certain any new coins work without interruption in existing coin acceptance equipment without modification; and

`(C) such other factors that the Secretary, in consultation with merchants who would be affected by any change in the weight and composition of currency denominations, vending machine and other coin acceptor manufacturers, vending machine owners and operators, transit officials, municipal parking officials, depository institutions, coin and currency handlers, armored-car operators, car wash operators, and American-owned manufacturers of commercial coin processing equipment, considers to be appropriate and in the public interest, in accordance with subchapter II of chapter 5 of title 5, United States Code.

`(3) COMMENT AND SELECTION PROCESS- In making any determination with respect to any change in the weight and composition of any coin, the Secretary shall enter into a formal rulemaking process.’.

(b) Technical and Conforming Amendments-

(E) by striking paragraph (6) and inserting the following new paragraph:

`(b) Specifications for $1 Coins and Gold Coins- The $1 coin shall be golden in color, have a distinctive edge, have tactile and visual features that make the denomination of the coin readily discernible, be coined, be minted and material fabricated in the United States, and have similar metallic, anti-counterfeiting properties as United States coinage in circulation on the date of enactment of the United States $1 Coin Act of 1997. In minting gold coins, the Secretary shall use alloys that vary not more than 0.1 percent from the percent of gold required. The specifications for alloys are by weight.’.

(B) by striking the second and third sentences.

(1) IN GENERAL- Except as provided in paragraph (2), the amendments made by this section as it pertains to each individual coin, other than subsection (b)(1)(E), shall take effect at the end of the fiscal year which is the 5th of 5 sequential fiscal years in each of which the net cost of producing such circulating coins under section 5112 of title 31, United States Code, other than the 1-cent coin, has exceeded the total face value of such coin.

(2) 1-cent COIN- The amendments made by this section, to the extent such amendments relate to the 1-cent coin, shall take effect as of the date of the enactment of this Act, subject to the amendment made by section 4.

SEC. 4. IMMEDIATE REDUCTION IN THE COST OF PRODUCING PENNIES THROUGH THE USE OF STEEL PENNIES.

`(A) IN GENERAL- During the period beginning 180 days after the date of the enactment of the Coin Modernization and Taxpayer Savings Act of 2008 and ending on the effective date of any subsequent change by the Secretary of the composition of the 1-cent coin under paragraph (1), the 1-cent coin shall–

`(i) be produced primarily of steel; and

`(ii) meet such other specifications as the Secretary may determine to be appropriate, including any change in the weight from that specified in subsection (a)(6).

`(C) EXCEPTION FOR LINCOLN BICENTENNIAL NUMISMATIC PENNIES- No provision of this paragraph shall apply with respect to 1-cent coins described in section 304 of the Presidential $1 Coin Act of 2005 that are issued for numismatic purposes.’.

How’s this for a novel idea. Let’s return to Constitutionally mandated gold and silver coins, abolish the Federal Reserve and knock off all this goverment created inflation.

I agree 100% with the previous comment by Donald H. Dool. Let’s return to the “dollar of our fathers” as defined in the 1792 Coinage Act and all the full-bodied pennies, nickels, dimes etc. it authorized. And yes, the inflation-factory Federal Reserve should be dismantled in the name of honest, Constitutional money. If this “novel idea” is not acted on, our dollar and coins will someday be relagated to the museums. By the way, the penny and nickel are beginning to disappear, and will disappear, not because of some Congressional act or pressure from some groups, but because of Gresham’s… Read more »