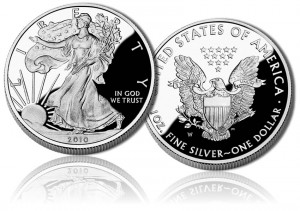 They have not only passed the 2008 Proof Silver Eagle which finished at 700,979, but they currently rank as the ninth highest since the series was introduced in 1986.

The 2010 Proof Silver Eagle opened strong with three-day sales of 273,212. Those who initially suggested the level was weaker than expected despite easily overcoming prior openings are now realizing the eagle could break new mintage ground.

Hurting their chances of climbing too high up the mintage chain is their late November 19 release. The US Mint has not indicated how long they will be available or when the 2011 Proof Silver Eagle will launch.

The current buying pace appears to be steady to somewhat better than past issues. In typical US Mint product releases, opening sales sizzle and then cool. Each succeeding week’s sales numbers decline until a general support level is achieved.

However, it is more difficult to judge how fast the recent pace has slowed for the 2010 Silver Eagle. The latest total includes two weeks of sales data since the US Mint was working on their reporting last week and an update was not available. As such, the only known facts are the opening three-day sales numbers of 273,212 and the latest tally of 707,704, which is a two-week increase of 434,492.

The US Mint, to its credit, has turned the corner and moved ahead confidently with the Silver Eagles since some initial snafus surrounded their launch, including erroneous sold out emails and deleted orders. Despite an all-time record sales month for the bullion 2010 Silver Eagle in November, the US Mint has been able to keep up with demand for the proofs. Early orders have already been shipped to collectors and the initial 100 household order limit has been lifted. Most importantly, both the proof and bullion versions are easily available to buyers — neither has been suspended, or canceled.

Where do you get the mintage numbers for the silver proof eagles? I’ve got conflicting numbers from other sites.