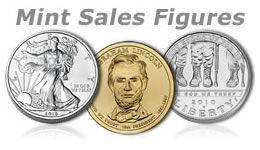 The latest round of U.S. Mint sales figures are mixed for numismatic products, but resoundingly explosive for 2010 Gold and Silver Eagle bullion coins.

The bullion coins have been on fire during the last few days, capping one of their best seven-day runs this year and making a week-over-week sales comparison a waste of time.

Gold Eagle bullion coins increased across the board — a rare occurrence given how the fractional sizes seldom move in tandem. One ounce Gold Eagles rallied 24,000, bringing their year-to-date total above the 1 million marker. That has happened in only five other years since the series was introduced in 1986, with 2009 and then 1999 being the most recent. (On a similar note, the collector proof versions approached their own milestone with nearly $100 million in sales during their first full month of availability.)

Silver Eagle bullion coins continue to move at a blistering pace, rallying by more than 1.3 million in the last week alone — 675,000 were purchased Wednesday when silver prices tumbled $2. Having already attained the all-time annual sales record with the latest tally taking them up over 30.2 million, the .999 fine silver bullion coins are now driving for and will soon achieve the record for the most year-dated coins sold. With the exception of the 2010-dated eagles which were not available until January 19, the U.S. Mint has sold new year issues in late December so dealers could offer them during the first week of January. As such, 2009-dated American Silver Eagles actually have sales of 30,459,000. The latest 2010-dated American Silver Eagles are currently sitting at 29,853,000.

As mentioned, collector numismatic products were mixed. Silver related and the proof Gold Eagles shined the brightest. First Spouse Gold Coins also improved as a group. The United States Mint also shifted several products lower, with perhaps return and cancellation adjustments being the reason. Products that remained unchanged or declined from prior weekly sales levels include:

The following tables show the latest coin sales figures as reported by the U.S. Mint:

The collector coin sales figures above have an "as of date" of November 7, 2010.

Mike Unser - July 1, 2022 60
The United States Mint announced prices and the type of finishes for their 2023-dated Morgan and Peace Silver Dollars. One of the five announced...