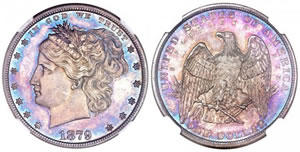 Rare U.S. Coins continue to provide for steady, even stellar prices in a crawling national economy, as evidenced by Heritage’s $9.42 million COINFEST Signature® U.S. Coin Auction, held Oct. 27-30 at the Marriot Hotel & Spa in Stamford, CT, and by the auction’s top lot, a magnificent 1879 Washlady dollar, which brought $161,000.

"These results are 20% percent higher than our pre-sale projections," said Greg Rohan, President of Heritage Auctions. "The market for rare coins is, simply put, very strong. The best examples continue to command top prices and the top collectors are more than happy to acquire these examples."

More than 4,380 bidders participated in the auction, both live on the auction room floor and via Heritage LIVE!™, the company’s proprietary live internet auction platform. The auction boasts a sell-through rate of 92% by value and 97% by number of lots.

Recent Heritage coin auctions have mostly seen examples of rare gold coinage taking the top slot, but the stunning 1879 $1 Washlady Dollar, Judd-1603, Pollock-1798, High R.6, PR66+ NGC, the finest known specimen, handily took top honors, finishing at $161,000 after a fierce bidding between advanced collectors. Between 12 and 15 examples are believed known of the Washlady dollar in both copper and silver. There is also one example known in white metal.

"In the late 19th century this design was not well received by dealers and collectors, and was apparently given the nickname of ‘Washlady’ by David Proskey around April 1891 at the Doughty Sale," said Rohan. "The name stuck, but today the Washlady design is considered one of the most beautiful ever produced by the Mint."

The equally rare and collector-coveted 1785 COPPER Connecticut Copper, African Head VF30 NGC. M. 4.2-F.6, W-2360, R.8., from The W. Philip Keller Collection of U.S. Colonials, took the second spot on the auction podium in Stamford, realizing $115,000, while a famous 1882 $20 AU53 PCGS, one of only 571 pieces struck – a coin so rare that even the Smithsonian Institution, keeper of the National Numismatic Collection, lacks an example of the issue – piqued the interest of numerous collectors of important gold with a final price realized of $80,500.

"While there are numerous double eagle issues from the late 1870s through early 1890s that boast extraordinarily low mintages," said Rohan, "the 1882 is the absolute lowest-mintage of them all, at 571 coins. Any representative of this issue, in any grade, is an extraordinary rarity."

A remarkable 1904 $20 PR65 Cameo PCGS was close behind the 1882 example with a final price of $74,750, a mark that was equaled in the auction by the finest known 1879 $1 Metric Dollar, Judd-1622, Pollock-1818, Low R.7, PR68 Cameo NGC, a highly desirable coin of great beauty and peculiar metallic composition (silver, copper, aluminum, and white metal) that drew considerable enthusiasm from collectors at the auction.

Mike Unser - January 15, 2021 1
The United States Mint will strike and sell renditions of Morgan and Peace silver dollars to mark the 100th anniversary of their switchover. Specifically, Public...