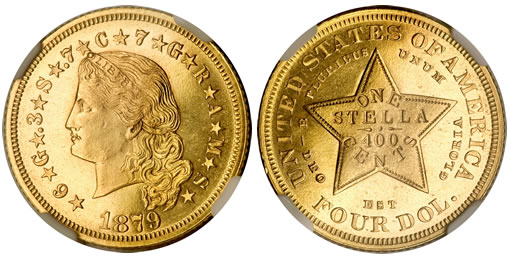 The impressive tally is a good sign for the coin market and provides strong momentum as the numismatic world prepares for the January FUN auctions, long a solid indicator of the overall strength of the business and a benchmark by which to judge the coming year.

"We saw some very strong prices in some unexpected areas," said Greg Rohan, President of Heritage Auctions. "The rare coin market seems to be almost fully recovered in many areas, and perhaps even headed for record price levels next year."

A stunning 1879 Flowing Hair stella struck in gold, Judd-1635, Pollock-1833, PR65 NGC was the top lot of the Heritage Auctions event, with a price realized of $161,000 for this international trade coinage pattern, which bears a Flowing Hair portrait of Liberty by Charles Barber. Demand for the issue is far greater than the supply; only a few hundred of the gold 1879 Flowing Hair stellas were minted and distributed, mainly to interested members of Congress.

A 1925-S $20 MS66 NGC Saint-Gaudens double eagle, one of the prime condition rarities in the series, illustrated the continued demand for prime examples of these numismatic masterpieces, and that collectors are willing to pay significant sums to obtain the best specimens as it realized $149,500. The 1925-S is more available to collectors in circulated condition than Mint State, unusual for mintmarked double eagles of the time period, and high-grade survivors are prized rarities. The 1925-S in the Dallas auction is tied for the fourth best known of its kind.

"We’re obviously quite happy with the results, as shown by the quite respectable prices seen in just our top three lots," said Rohan. "The strong prices and active bidding, however, continued throughout the auction, at all price points, and showed the numismatic public is very engaged in the current market."

Realizing $92,000, an 1851 K-4 $50 Lettered Edge Humbert $50, 887 Thous. 50 Rev. AU55 PCGS was one of the finest specimens of this historic octagonal "slug" that Heritage Auctions has ever offered. PCGS has certified only five coins in AU55, with only five examples finer. Another Saint-Gaudens double eagle, an exceptional 1929 $20 MS65 PCGS, CAC from The Volunteer Collection, also performed well in the auction, realizing $89,125. The 1929 double eagle was at one time considered a major rarity in the series, but has seen availability open up to a wider audience with the importation of overseas examples in recent decades. Still, in the current grade of MS65, PCGS has only certified 32 at this level or higher, warranting the high five-figure price tag.

One of the most intriguing lots of the Heritage Auctions Dallas U.S. Coin auction was a Kellogg & Humbert gold ingot (c. 1855-57), 53 mm x 43 mm x 28 mm, CAGB-450, recovered from the S.S. Central America. Capitalizing on its precious metal value, along with its numismatic value – and the always important "shipwreck treasure" aspect – this impressive ingot captured the imaginations of all who saw it and bid on it on its way to a $69,000 price realized.

Two rare 1960s U.S. cents figured prominently into the mix over the weekend event, as an important 1969-S 1C Doubled Die MS63 Red NGC, FS-101, formerly FS-028, and a remarkable 1969-S 1C Doubled Die AU55 PCGS, also FS-101, formerly FS-028, realized $57,500 and $54,625, respectively. Both are examples of one of the most prominent doubled die varieties in the Lincoln cent series — indeed, in all of American numismatics — and also one of the most controversial early in its history, when several specimens seized by the Secret Service as counterfeits and destroyed before the variety’s authenticity became widely recognized.

The top 10 lots of Heritage Auctions’ Dallas U.S. Coin auction are rounded by a memorable 1885 $20 MS61 PCGS, from The Little Rock Collection, one of only 751 examples struck, which realized $57,500; and a truly spectacular 1895 $1 PR66 Cameo NGC, one of just 880 pieces coined for the famous proof-only issue and among the finest specimens Heritage Auctions has offered. It also realized $57,500.

Heritage Auctions, headed by Steve Ivy, Jim Halperin and Greg Rohan, is the world’s third largest auction house, with annual sales more than $700 million, and 470,000+ registered online bidder members. For more information about Heritage Auctions, and to join and gain access to a complete record of prices realized, along with full-color, enlargeable photos of each lot, please visit www.HA.com.

Heritage Auctions continues to go strong, almost without regard for the economy, perhaps proof that tangible assets are a more solid investment than the stock market.