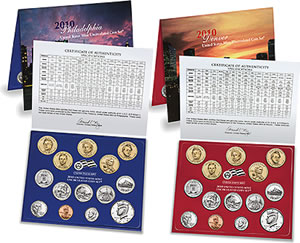 Both sets will launch on their corresponding days at noon Eastern Time, and each will be listed for $31.95 — a $2 increase for the Proof Set and a $4 increase for the Mint Set, as compared to their 2009 prices.

Each of the sets include collector versions of all the circulating 2010 coins, which include:

Plus, the following 2010 America the Beautiful Quarters:

The 2010 Proof Set coins (14 in all) are minted in San Francisco with each bearing the denoting "S" mint mark.

"The coins are manufactured using specially prepared, highly polished dies. The coins are extraordinarily brilliant, with sharp relief and a mirror-like background," the Mint describes in a statement. "A frosted, sculpted foreground gives these coins a special cameo effect. The coins are sealed in three protective lenses to showcase and maintain their exceptional finish. A Certificate of Authenticity is included with each set."

The 2010 Mint Set features double the coins (28), as it includes both Philadelphia and Denver uncirculated versions.

"The United States Mint Uncirculated Coin Set includes two folders, each containing 14 coins from the United States Mint facilities at Denver and Philadelphia," describes the Mint. "The coins are struck on special presses using greater force than circulating coins, producing a sharp, intricately detailed image. The satin-finish coins are displayed in a folder that includes a Certificate of Authenticity."

When available, the sets may be ordered through the Mint’s online store at http://www.usmint.gov/catalog, or via their toll-free number 1-800-USA-MINT (872-6468). Hearing and speech-impaired customers may order by calling 1-888-321-MINT (6468). All domestic orders will be assessed a shipping and handling fee of $4.95 per order.

$2 and $3 increases over last year with fewer coins in the set…. *sigh*