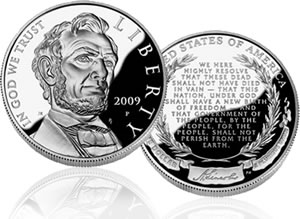 The 2009 Abraham Lincoln Commemorative Silver Dollars were released by the U.S. Mint on the bicentennial of the birth of the 16th President of the United States, February 12, 2009.

They were hot. The Mint’s entire mintage of 450,000 single coins sold out in six weeks. Broken out between the two options issued, 325,000 proof and 125,000 uncirculated coins were scooped up by collectors.

50,000 proof dollars were kept in reserve for the Lincoln Coin and Chronicles Set, which was attractively packaged to also include proofs of the four redesigned 2009 Lincoln cents with their special 95% copper compositions. The sets debuted on October 15, 2009 and sold out in 30 hours, adding up to the 500,000 authorized Lincoln commemorative coin limit.

Six months after the individual coins sold out and right before the chronicles sets launched, significant premiums were already being paid for the silver dollars on the secondary market. It was common to find them listed for twice the original Mint price. Today, the highest graded coins are selling for even more. 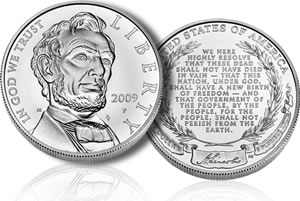 In looking at recent uncirculated Lincoln Silver Dollar values, ungraded examples have appeared on eBay at a rate of approximately two per day over the last month. In those auctions, the average price paid is nearly $54, equating to a $20-plus premium over the $31.95 introductory Mint price.

Graded MS69s are mostly hovering around the $60 level.

Graded MS70 coins are topping out in the $125 range, bringing sellers a tidy profit if they managed to get them at the original Mint cost.

Turning to recent proof Lincoln Silver Dollar values, the sampling base is higher with many for sale. Interestingly, the average $56 buyer’s paid is just $2 more than the ungraded uncirculated coins. That, despite its higher issue price (introduced at $37.95), and significantly higher demand from both the Mint and then early on in the secondary market. Today, ungraded proofs are losing ground to the much lower minted uncirculated coins.

Where the proof Lincoln dollars continue to shine, however, is in the graded arena. PF69 coins are averaging in the mid $70 range, giving them a $20 advantage over most ungraded coins.

Stepping it up a notch, coins receiving the coveted PF70 grade are having no problems selling for well over $150, making them the kings of the Lincoln coins.

Only time will tell how well the Lincoln Commemorative Silver Dollars continue to hold their value, and their tripling original Mint issue prices in the higher grades. Currently, it appears that the lower minted uncirculated coins are making advances.

I have 8 of them. I have no idea what to do with them. Any suggestions