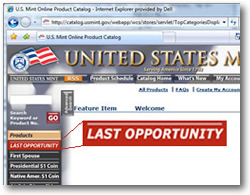 Only hours remain until the United States Mint stops selling a range of products released last year that include rolls of 2009 Lincoln cents and three annual sets containing the pennies.

The US Mint first published its "Last Opportunity" or "Last Chance Sale" back in May. The sale contains two major cut off dates for product offerings — Tuesday, June 15 and Wednesday, June 30, 2010.

The last date ends sales of six 2009 District of Columbia and U.S. Territories Coin Covers. The first stops sales at 5:00 p.m. Eastern Time for the penny rolls and sets. In an email notice sent to customers on Monday, the Mint stated:

The following paragraphs offer a brief overview of the products that will be discontinued on Tuesday along with their latest sales figures as of Sunday, June 6, 2010:

The products are being sold at their original prices. Customers may order them online from the US Mint page:

Buy a nice 1909 s cent instead of over produced modern cents .

[…] were issued, like all the 2009 sets containing the four bicentennial Lincoln pennies which went off sale June 15. The Mint has also continued selling (and still is) 2009-dated sets after the 2010 versions were […]