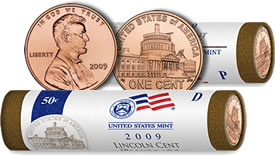 The fourth and final redesigned 2009 Lincoln cent launched in Washington, D.C., on Thursday, Nov. 12. By the following Sunday and according to the latest US Mint sales report, 153,427 of the two-roll sets were scooped up by collectors. Crunching the numbers and moving the decimal point, that is 15.3 million pennies.

During the same initial days following the launch of the previous two pennies, 15.2 million of the third Professional Life cents sold, and 20 million of the second Rail Splitter pennies sold.

In contrast, it took almost two weeks for collectors to purchase 9.6 million of the first 2009 Lincoln Birthplace cents — although these set the demand tone for the next three cents when the Mint unexpectedly stopped selling them. The following table provides the latest sales data for the Lincoln penny rolls.

The US Mint wrapped Lincoln Presidency two-roll sets, with 50 coins from Philadelphia and 50 coins from Denver, are available directly from the US Mint for $8.95, plus a $4.95 shipping and handling fee.

The reverse design of the final 2009 cent features an unfinished United States Capitol dome, as it would have appeared when Lincoln first took office as President. It was designed by U.S. Mint Artistic Infusion Program Master Designer Susan Gamble and was sculpted by U.S. Mint Sculptor Joseph F. Menna.