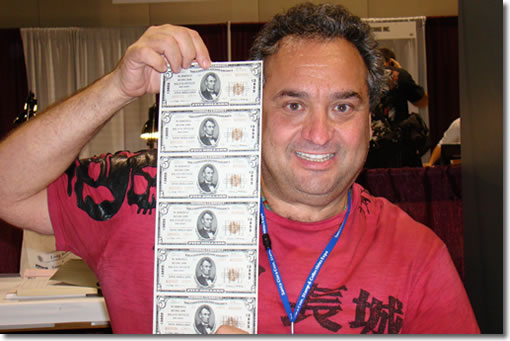 The sheet was taken in an October 2008 burglary from the offices of dealer Kevin Lipton of Beverly Hills, California, and is the only item recovered so far.

"It’s the only thing stolen from my office that I ever cared anything about," said Lipton who gratefully gave a $5,000 reward to the part-time dealer who recovered and returned the sheet.

"The notes are from Branchville, New Jersey, and that’s the town where I went to summer camp as a child. I bought the sheet at a Christie’s auction in 1982, and they were framed and displayed in my office for years. The notes are reminiscent of my youth," explained Lipton.

The sheet is the only known six-note uncut sheet of Series 1929 Type II National Currency $5 notes from The Branchville Bank in Branchville, New Jersey. The notes are consecutively numbered, A000001 through A000006.

It was recovered unframed by Virgel Nickell of Santa Ana, California who describes himself as "a dabbler" in National bank notes. Nickell was at a swap meet in Huntington Beach, California in early May when he was approached by a young man who wanted to sell the notes.

"He wanted $500 for it. I figured it was a common sheet, but my reaction was that it was good buy at $500. But when a friend and I researched it on the Internet we learned it was not only rare, it was not mine," said Nickell.

"I couldn’t believe it when he showed me the notes. They’re the only thing taken that I cared about," Lipton reiterated.

Long Beach Expo General Chairman Ronald J. Gillio was at Lipton’s table as the notes were being returned. "Kevin was ecstatic. He was so excited, his face was just beaming," Gillio said.

Anyone with information regarding the theft or the still missing coins and paper money is urged to contact the Detective Division of the Beverly Hills Police Department at (310) 285-2158.