Dallas, TX. The Official Currency Auction of the Central States Numismatic Society convention, held by Heritage Auction Galleries, realized $14,164,504, the largest currency auction ever, and the final total will be even higher after Post Auction Buys are concluded. Combining the rare coin and currency results, total prices realized at Central States currently exceed $44.4 million. More than 6,700 bidders participated in Heritage’s Signature events, and another 3,000-plus bid in the Final Sessions. 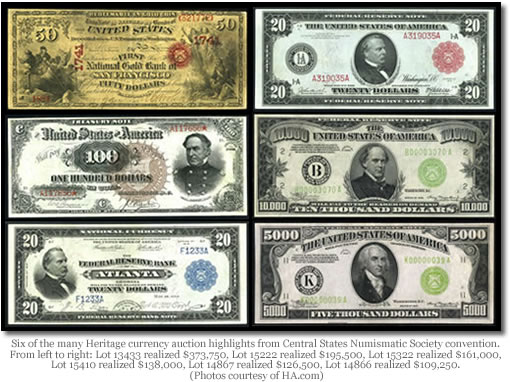 The auctions were held in Rosemont, Illinois on April 16-18; Images, descriptions, and prices realized for all lots can be viewed at the Heritage website, HA.com.

“This was our largest Heritage currency auction ever,” enthused Allen Mincho, “surpassing even our fabled Taylor Family Collection auction in February of 2005. We were incredibly pleased with the results at Central States, but even more astonishing was the bidder participation.

We have never seen so many bids placed through every means. On many lots, we would open and ten cards would shoot up in the room, and they would be competing against three bidders on the telephone and two more on Heritage Live. The bidding on many lots was so intense – and sustained – that they took ten minutes to sell! Many of the dealers present expressed their astonishment.”

“As we expected,” concluded Len Glazer, “the market is continuing to react most strongly when rarity and quality are combined, but either one of those elements was sufficient to inspire spirited bidding. This was our best Central States Currency auction ever, and we are looking forward to our September auction in Long Beach.”