The Perth Mint’s 2010 Gold Proof Australian Sovereign marks the second year return to regular sovereign production for the Perth after a 78-year hiatus. 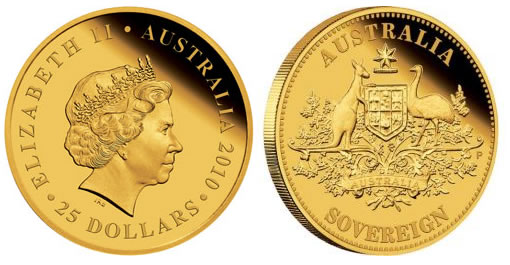 These new strikes are composed of 22-carat gold and are sure to be hot among collectors not only for their gold content, but also for their limited mintage and for their link to the history of coinage.

The Perth Mint was striking gold sovereigns almost immediately after its initial construction was completed in 1899. In fact, the sovereigns were the main reason for the Perth being constructed.

At that time, Australia was still a colony of Great Britain whose Royal Mint was charged with producing the coinage for the British Empire. In order to accomplish this task in the most efficient method, the Royal Mint created branch mints around the world near gold deposits. In this way, the gold could be mined, turned into the mint, refined and struck into gold sovereigns — all without having to ship unrefined gold far distances.

As for the Perth, its location near the gold deposits of Coolgardie and Kalgoorlie dictated its construction despite there already being two branches of the Royal Mint in Australia – the Sydney Mint and the Melbourne Mint. The Perth continued to strike millions of the the gold sovereigns until 1931 when the British government abandoned the gold standard.

The Perth did not abandon its gold refining, however and continues the process even today. Only last year, however, did the Perth return to the production of sovereigns in these uniquely collectible coins. (See 2009 coin article.)

On the obverse or heads side of the coin is Ian Rank-Broadley’s effigy of Her Majesty Queen Elizabeth II and the inscriptions "2010", "25 DOLLARS", and "ELIZABETH II".

For the reverse, the Mint has included the inscriptions of "AUSTRALIA" and "SOVEREIGN" as well as a version of the Australian Commonwealth Coat of Arms designed by Darryl Bellotti. The Perth Mint describes it thusly:

Each Australian Sovereign is struck to supreme proof quality from 0.2352 troy ounces of gold with a purity of .9167 (22-karat).

The gold coin is considered legal tender with a face value of AUS $25, according to the Australian Currency Act of 1965.

An extremely limited mintage of only 2,500 is strictly adhered to by the Mint. Each coin is housed in a timber presentation case and sent in an illustrated shipper with a numbered Certificate of Authenticity.

The price for the Australian Gold Sovereign is listed at AUS $590.