The Perth Mint of Australia released its 2011 Proof Australian Sovereign Gold Coin on May 3, marking the third year of issue after a 78-year hiatus from regular sovereign production.

"The sovereign is one of the most famous gold coins ever made," states The Perth Mint. "During the 19th and early 20th centuries, the Australian mints in Sydney, Melbourne and Perth contributed to its success in no small measure by producing large quantities from locally mined gold. More than 106 million sovereigns were produced in Perth alone."

The reverse or tails side of the 2011 Proof Australian Sovereign Gold Coin features the Australian Commonwealth Coat of Arms. The Coat of Arms consists of the badges of the six States of the Commonwealth on a shield enclosed by an ermine border signifying the Australian Federation in 1901. The Crest of the Arms, including a seven-pointed Star, appears above the shield, which is supported by a kangaroo and an emu. Inscriptions include AUSTRALIA, SOVEREIGN, and The Perth Mint’s "P" mintmark.

The obverse or heads side of the Australian Sovereign Gold Coin features Ian Rank-Broadley’s effigy of Queen Elizabeth with inscriptions of her name, AUSTRALIA, 2011, and 25 DOLLARS. 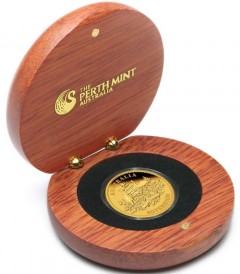 The current price of the proof coin is $613 AUS (~$673 US), although it may change based on the prevailing spot price of gold. It is limited to a worldwide mintage of 2,500.

Orders may be placed online through The Perth Mint website at http://www.perthmint.com.au/.

The 2011 Proof Australian Sovereign Gold Coin is packaged within a presentation case and comes with an illustrated shipper and numbered Certificate of Authenticity.

The Perth Mint (http://www.perthmint.com.au/), wholly-owned by the State Government of Western Australia, is the official issuer of the Australian Federal Government’s Gold and Silver Bullion Coin Program. The Mint opened in 1899 in response to the discovery of rich gold deposits in Coolgardie and Kalgoorlie. It was Australia’s third branch of Britain’s Royal Mint — the others being the Sydney Mint and the Melbourne Mint (both closed).

This one gold sovereign coin should add to coin collection? So with $25 gold kangaroo in the sunset coin this make great coin set!