The Perth Mint on Friday launched the 2009 Perth Mint Gold Proof Sovereign, a modern Australian version of a world famous coin. Struck in 22-carat gold and in proof quality for collectors, the newly introduced coin is to be issued annually with an extremely limited worldwide mintage of just 2,500. 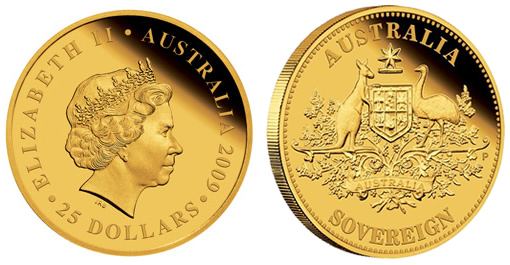 The reverse or tails side of the gold coin features the Australian Commonwealth Coat of Arms and the inscriptions "AUSTRALIA", "SOVEREIGN" and "P" for the Perth Mint mintmark. As described by the Mint,

The obverse or heads side of the coin has the Ian Rank-Broadley effigy of Her Majesty Queen Elizabeth II, the inscriptions "2009", "25 DOLLARS", and "ELIZABETH II". 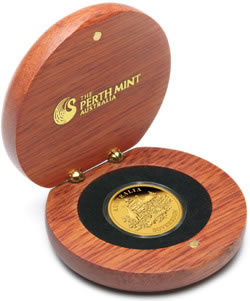 The current price of the coin is $590 AUS (~$461 US), although it may change based on the prevailing spot price of gold.