The Government of the British Virgin Islands is delighted to announce a new coin release celebrating the 60th Anniversary of Peanuts™, the famous cartoon strip featuring Charlie Brown and his dog, Snoopy. 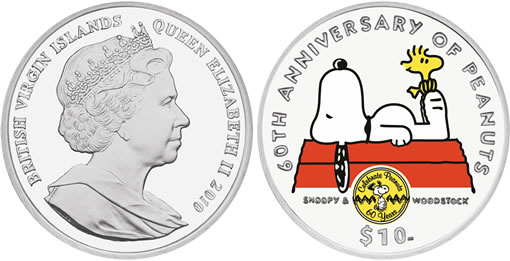 The character of Snoopy first appeared in Charles Schulz’s Sunday comic strip in October 1950 and he is now one of the most recognised cartoon characters in the world, loved and adored by many fans. Snoopy was a silent character in the comic strips until 1952, when his opinions were shown through a thought balloon.

By the 1960s, most of the comic strips focus upon Snoopy and we see him grow from being a puppy to a fully functioning adult dog… with extras. We see Snoopy walking on his hind legs, using a typewriter, reading a book, he also adapts many personas including a pilot and an astronaut — he even has an alter-ego, a college student called ‘Cool Joe’ who wears sunglasses.

However, Snoopy is most renowned for two things… laying on top of his doghouse and his best friend, a bird called Woodstock. Over the last 60 years, this iconic character has featured in numerous films, animated series and merchandise as well as the comic strip where it all started.

The work of Charles Schulz is described as, "the most shining example of the American success story," whereas his character, Charlie Brown is an example of, "the great American un-success story" in that he fails in practically everything he does which makes him such a likable character.

An official Peanuts™ commemorative, the design of the coin depicts a classic image of Snoopy laying on the rooftop of his doghouse with friend Woodstock perched on his feet.

Approved by Buckingham Palace, the obverse of the coin bears a fine effigy of Her Majesty Queen Elizabeth II by Ian Rank-Broadley FRBS. The Proof Fine 999.9 Gold coin is available plain or coloured whilst the Unc. Cupro Nickel and Proof Sterling Silver coins are presented as coloured versions to make Snoopy and Woodstock come to life.

To view this coin and others in the range please visit www.pobjoy.com.

please tell me where I can order one of these peanuts
anniversary silver rounds.
Thank you

I ordered one off of govmint(dot)com.