The Royal Australian Mint launched 2009 by celebrating sixty years of the enactment of the Australian Citizenship Act 1948 with the release of a proof silver dollar and an uncirculated $1 coin. 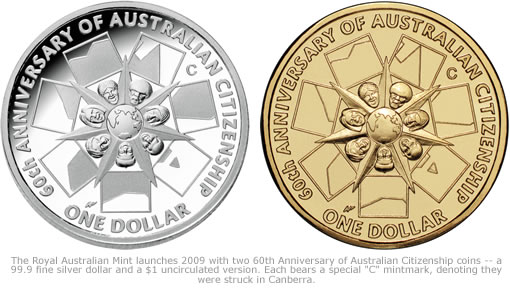 These coins uniquely bear a "C" mintmark, denoting they were minted in Canberra. And according to the Mint, no other coins in 2009 will include the mark.

The following statements were released explaining the importance of the coin and its design:

"I am proud to be unveiling our newest coin design which celebrates our unity as a country. By unveiling this new coin design each Australian has the opportunity to hold a piece of history in their own hands," said Deputy Chief Executive Officer Graham Smith.

The 2009 $1 Citizenship coin design features the smiling faces of the very first Australian citizens in 1949, each as individual as the country they originate from. Their raised hands symbolises their pride in becoming an Australian citizen, now linked symbolically to create the star of Federation.

The coins are available through the Royal Australian Mint online store.