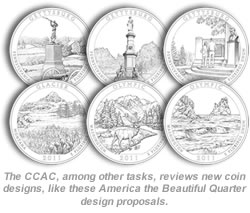 WASHINGTON – The United States Mint is seeking applicants for appointment to the Citizens Coinage Advisory Committee (CCAC). The term of one CCAC member will expire in March 2010.

The new member would represent the interests of the general public. The application deadline is March 31, 2010. The United States Mint will review all applications and will forward recommendations to the Secretary of the Treasury for appointment consideration.

The CCAC was created to advise the Secretary of the Treasury on the selection of themes and design proposals for circulating coinage, commemorative coins, bullion coinage, Congressional Gold Medals and other medals.

Individuals wishing to be considered for appointment as a CCAC member representing the interests of the general public or as a numismatic specialist should submit a letter, along with a resume or curriculum vitae, detailing specific educational credentials, skills, talents and experience. Applicants must specify which position for which they wish to be considered. Applications should be submitted by fax to 202-756-6525, or by mail to the United States Mint, 801 9th St., N.W., Washington, DC 20220, Attn: Greg Weinman. Submissions must be postmarked no later than March 31, 2010.

For further information, individuals may contact Clifford R. Northup, the United States Mint Liaison to the CCAC, at (202) 354-7463. Additional information is also available on the CCAC’s website at http://www.ccac.gov.