The Perth Mint has released the Sydney 2009 World Masters Games Coin in anticipation of a sporting event that has grown to involve more competitors than the Olympics. 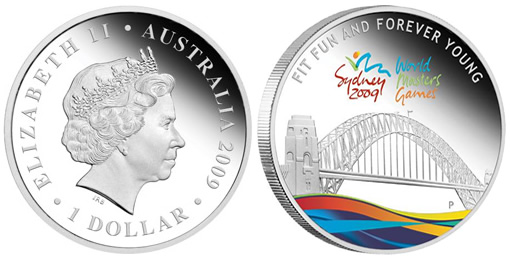 The World Masters Games began in Toronto in 1985. They have occurred on approximately 4 year intervals ever since. The games have been held in Aalborg, Aarhus and Herning, Denmark (1989), Brisbane, Australia (1994), Portland, Oregon, United States (1998), Melbourne, Australia (2002) and Edmonton, Canada (2005).

Almost 25,000 competitors are estimated to have participated in the Melbourne 2002 World Masters Games, which is more than double the number of athletes that were in the Beijing 2008 Summer Olympics. This huge difference is mainly attributed to the World Masters acceptance of people with varying abilities and ages.

The 2009 World Masters Games will be held in Sydney, Australia. Twenty Eight different sports will be a part of the competition ranging from archery, to touch football, to weightlifting and to golf. The motto "Fit, Fun & Forever Young" is the chosen theme, which is also depicted on the Australian coins.

The coins authorized by the Sydney 2009 World Masters Games Organising Committee are struck in 1 oz 99.9% pure silver proof and in a base metal $1 uncirculated version. Issued as legal tender in Australia under the Australian Currency Act 1965, both coins carry a face value of AUS $1 and have a portrait of Queen Elizabeth II on the obverse.

The reverse of the silver proof depicts Sydney’s iconic Harbour Bridge and a colorful representation of water underneath the bridge. The games motto, "FIT FUN AND FOREVER YOUNG," and the Perth Mint’s mintmark are seen as well. The uncirculated coin has a similar, but uncolored design.

With a limited mintage of only 5,000, the AUS $88.64 (~$71 US) silver proof coin comes in a presentation case with a numbered Certificate of Authenticity. The AUS $12.68 (~$10 US) uncirculated coin is affixed to an illustrated presentation card and has an unlimited mintage.