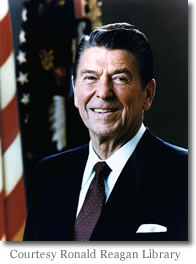 A newly introduced House Resolution, if passed, would replace President Ulysses S. Grant’s portrait on the $50 bill with an image of President Ronald Reagan.

"Every generation needs its own heroes. One decade into the 21st century, it’s time to honor the last great president of the 20th and give President Reagan a place beside Presidents Roosevelt and Kennedy," said Congressman McHenry. "President Reagan was a modern day statesman, whose presidency transformed our nation’s political and economic thinking."

President Roosevelt is featured on the dime and President Kennedy on the half-dollar.

According to McHenry, polls of presidential scholars show that "President Reagan consistently outranks President Grant." Ulysses S. Grant was the 18th U.S. President, and has been featured on the $50 since 1929.

Reagan was the 40th U.S. President, and would have been 99 years old this February.

Several events are planned in 2010 to honor his 100th birthday. Another bill introduced last year, the Ronald Reagan Commemorative Coin Act of 2009, would authorize the United States Mint to strike 50,000 $5 commemorative gold coins and 300,000 silver dollars to celebrate his life and historic achievements.

The $50 note was last redesigned in 2004 and first entered circulation in September of that year. The $50 now includes extra security features and new background colors. According to the Bureau of Engraving and Printing, the government agency responsible for printing US currency, the new coloring incorporates "shades of blue and red along with an image of a waving American flag and a metallic silver-blue star." The BEP produced 371.2 million $50 banknotes in FY 2009.

H.R. 4705 currently enjoys the support of 15 cosponsors, and has been referred to the House Committee on Financial Services. For legislation to become law, it must pass in the House, Senate, and get signed by the President.

Why don’t they just resurrect the idea of placing President Reagan on the dime? While I’m tired of our current portraiture series of coins, the timing’s right to place him on the coin for his centennial in 2011. 2010 marks the 65th year of the Roosevelt dime. It is also the traditional retirement age. So “retire” the Roosevelt image with dignity and replace it with a new coin as it could have been anytime after 1970.

While we’re at it, why not a Teddy Roosevelt bill or coin? He’s as deserving as anyone but nobody seems to care about him either.

Bonzo might be a hero to some, but not to me.

His policies only benefited the rich (what a shock).

He had scandals like all of the recent presidents.

He is not deserving of that honor.

If you want to put ronnie on some money, make it monopoly money!

Now that I think about it, I think if we had to have President Reagan on something, it should be the half dollar. The Kennedy design has had a good run and on top of it, I could imagine that Republicans would want to see this coin be successful and force vendors to finally accept half dollars to make the coin more acceptable. The half dollar is badly in need of resurrection. I do what I can giving them out in change at work, but there’s only so much one man can do (and that’s apparently about 1500 coins a… Read more »

Don’t try repairing our economy, change the picture on a denomination, that may soon be used to buy a day’s food. Bring back the $500 bill, and maybe even a circulating $1,000 bill. Who knows! With inflation, we may need both denominations.

I agree with Ed. If the Republicans really think Reagan deserves to be honored on US currency, issue an Air Traffic Control commemorative coin and put him on that. Hey, what about Gerald Ford? Jefferson has had a long run on the $2 bill; let’s give Ford a turn.