VANCOUVER, British Columbia — With one day remaining before the eyes of the world turn to Canada for the Vancouver 2010 Olympic and Paralympic Winter Games, the Royal Canadian Mint is proud to issue the 2010 Lucky Loonie. 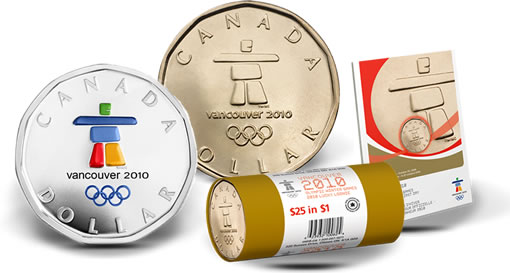 The one-dollar coin, which features the Ilanaaq, the Official Emblem of the Vancouver 2010 Olympic Winter Games, was launched at a public hockey shoot-out special event outside the Royal Canadian Mint Pavilion in downtown Vancouver.

"Canadians have waited years for the Olympic and Paralympic Winter Games to finally begin in Vancouver and the Lucky Loonie is a symbol of luck for our athletes participating in these two extraordinary sporting events," said Ian E. Bennett, President and CEO of the Royal Canadian Mint.

"The Mint has provided each member of the Canadian Olympic and Paralympic Teams competing in Vancouver with a Lucky Loonie as their own personal good luck charm and through the launch of the coin, Canadians have an opportunity to own a piece of the Games."

Ten million 2010 Lucky Loonies, designed by Royal Canadian Mint engravers, have been produced and will be distributed exclusively by RBC Royal Bank, Exclusive Distributor and Promotional Partner with the Royal Canadian Mint and are available at RBC branches across the country beginning tomorrow, February 12th. RBC is a Premier National Partner of the Vancouver 2010 Olympic and Paralympic Winter Games. Canadians can also look for these special coins in their change.

The Mint and RBC are also inviting the general public in Vancouver to obtain their very own 2010 Lucky Loonie by attending special coin exchanges to be held today from 1:00 pm – 3:00 pm at the following RBC branches across the city:

In addition to the circulation coin, the Mint is also offering the following 2010 Lucky Loonie keepsakes, located at www.mint.ca/2010:

From February 12-28, the Mint is welcoming the world to the Royal Canadian Mint Pavilion, located in downtown Vancouver. This must-see exhibit allows visitors to get an up-close view of the Vancouver 2010 medals; see the Mint’s world-famous million-dollar gold coin and other gold products; learn how coins are made; participate in children’s programming; and collect all Vancouver 2010 circulation coins and purchase unique Vancouver 2010 souvenirs.