Ottawa, Ontario – With the Beijing Olympic Games and Beijing Paralympic Games just around the corner, the Royal Canadian Mint is proud to issue the 2008 Lucky Loonie, the latest in its extensive Olympic themed circulation coin program. 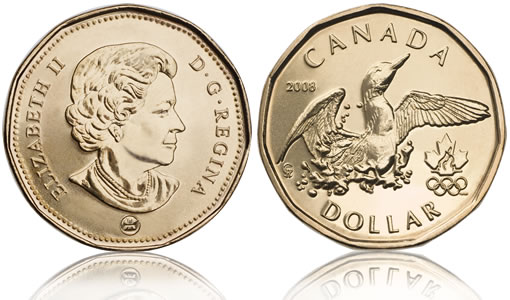 The one-dollar coin, which features the familiar loon landing in water and the official emblem of the Canadian Olympic Team, enters into circulation today.

"The Mint has provided each member of the Canadian Olympic and Paralympic Teams competing in Beijing with a Lucky Loonie as their own personal good luck charm and through the launch of the coin, Canadians also have an opportunity to own a piece of the Olympic dream."

Ten million 2008 Lucky Loonies, designed by Quebec wildlife artist Jean-Luc Grondin, have been produced and will be distributed exclusively by RBC Royal Bank and are available at RBC branches across the country. RBC is a Premier National Partner of the Vancouver 2010 Olympic and Paralympic Winter Games. Canadians can also look for these special coins in their change.

The Mint and RBC are also inviting the general public to obtain their very own 2008 Lucky Loonie by attending coin exchanges to be held on July 29, 2008 from 11:30 am – 1:30 pm at various RBC branches across the country, including the following:

Coin exchanges will also be held at Royal Canadian Mint boutiques in Ottawa and Winnipeg from July 25-27, 2008, during regular business hours.

In addition to the circulation coin, the Mint is also offering the following 2008 Lucky Loonie keepsakes, located at www.mint.ca/goodluck:

The Mint is also inviting Canadians from across the country to visit www.mint.ca/goodluck to share their own luck stories and enter a contest to win a one-ounce 2008 Gold Maple Leaf coin and other Royal Canadian Mint Olympic themed keepsakes. The website will also feature tales of good luck, submitted by 2008 RBC Olympians.

The Mint has undertaken to produce the most extensive circulation coin program in relation to the Olympic Games ever conceived by any mint worldwide. The Mint has exclusive rights for the 2010 Olympic and Paralympic Winter Games in the Minting of circulation, Precious Metal and Base Metal Numismatic and Bullion Coins product and service category and will also be responsible for minting the athlete medals.

The Royal Canadian Mint, which is celebrating its 100th anniversary in 2008, is the Crown Corporation responsible for the minting and distribution of Canada’s circulation coins.

An ISO 9001-2000 certified company, the Mint is recognized as one of the largest and most versatile mints in the world, offering a wide range of specialized, high quality coinage products and related services on an international scale.

For more information on the Mint’s history, its products and services, please visit www.mint.ca.

RBC sponsors amateur sport, from grassroots programs in local communities to national sport associations that support the development of amateur athletes who compete at home and abroad.

As Canada’s longest-standing supporter of the Canadian Olympic Team, since 1947, RBC continues this sponsorship through the Vancouver 2010 Olympic and Paralympic Winter Games.

I missed the lucky loonie exchange,I just realized around the beginning of August. Will there be exchange dates in August? I really want a lucky loonie and to support the athletes as well. Thanks.

I want to sell some of my coins, i have three lucky loonies, two in very good condition adnw as wondering what they were worth. Thanks

Yessss i have one