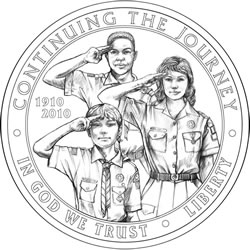 The United States Mint got off to a quick start this year by releasing a comprehensive 2010 schedule way back in December.

Although only general monthly times were provided then, the US Mint has since updated its product listing with exact launch dates through to the end of March.

The newly designed Native American $1 coins are the highlight for this month. The 2010 dollars are already available via the Mint’s Direct Ship Program. New 25-coin rolls will be available for $35.95 on the Jan. 22 at noon ET.

February will feature the release of the 2010 Presidential Dollars in proof. The four-coin proof set launches on Feb. 11. Following a week later on Feb. 18 are rolls of Millard Fillmore $1 coins.

The first silver commemorative of the year, the American Veterans Disabled for Life Silver Dollar, becomes available on Feb. 25. The coin honors those who were permanently disabled while serving in the United States Military.

The Abigail Fillmore First Spouse Gold coins will kick off March. The 24 karat, half ounce proof and uncirculated coins will be released on March 4. The 1 5/16 inch bronze medal will go on sale the same day. Also, the set housing the Abigail medal and uncirculated Filllmore Presidential $1 coin is scheduled for release towards the end of the month, March 26.

Finally, and the most anticipated based on current reader feedback… The Boy Scouts of America Centennial Silver Dollars will launch on March 23. The US Mint will produce a maximum mintage of 350,000 Philadelphia struck collector proof and uncirculated $1s to commemorate the 100th anniversary of the founding of the Boy Scouts of America (BSA). Most expect these coins to quickly sell out.

Unless provided above, prices and exact release times (normally noon ET) have not yet been determined.

The following provides the above numismatic product releases in grid form:

Visit the online store (http://catalog.usmint.gov/) at the US Mint web site for the latest changes. For information on upcoming coins, also see 2010 US Mint Coins.

This is a great article! We hope many people help support Scouting by purchasing the Silver Dollar Coin this year. The money received from the sale of these coins will greatly help many local councils around the country. The benefits of Scouting resonate throughout the Scouter’s life, helping in relationships, careers, hobbies, emergency situations, and education. We are the Hoosier Trails Council in central Indiana. Local councils around the country have lots of great events planned during this centennial year. ~ Feb 20, our council is hosting a centennial Pinewood Derby & Dodgeball Tournament, with trophies and patches! ~ May… Read more »