The United States Mint on Thursday issued collector proof an uncirculated 2009 Margaret Taylor First Spouse Gold Coins for the respective prices of $754 and $741. The coins are the thirteenth in a series of commemoratives designed to honor former first ladies of the United States. 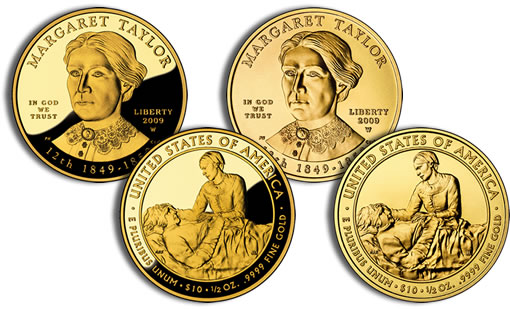 Each contains 1/2 ounces of 24-karat, .9999 fine gold, includes the "W" mint mark denoting their production at the US Mint facility in West Point, and has a face value of $10.

An order limit of 10 coins per product option per household has been put in place by the US Mint for the first week of sales. A combined maximum mintage of 40,000 is in effect for both versions, as outlined in the the Presidential $1 Coin Act of 2005, the law that authorized the series.

They may be ordered directly from US Mint’s website (www.usmint.gov) via:

Orders can also be placed using their toll-free number at 1-800-USA-MINT (872-6468). Hearing and speech impaired customers may order by calling 1-888-321-MINT. Numismatic gold coin prices may change weekly, and are determined by US Mint coin pricing policy which uses an average of the weekly London Fix for gold.

Those interested in Margaret Taylor but unable to justify the price can purchase a 1 5-16 inch Taylor bronze medal from the Mint for $3.50 each.

The US Mint previously released eight other 2009 First Spouse Gold Coins. They are still on sale and honor:

Immediately prior to the launch of the Taylors, the US Mint ended sales of the Van Buren coins, which were the final remaining 2008-dated offering. The first lady series began in 2007.