Orders for Margaret Taylor First Spouse Gold Coins open beginning at Noon (Eastern) on December 3, 2009, the US Mint announced Wednesday. The Taylor coins are the 5th First Spouse coins released this year and the 13th for the series. 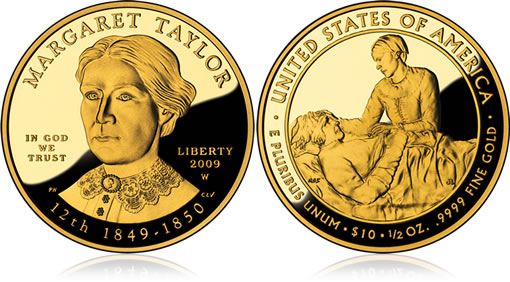 Each coin is struck from 1/2 ounce of 24-karat gold in either proof or uncirculated condition at the US Mint’s facility in West Point. A maximum mintage of 40,000 units has been put in place for both versions with the exact ratio of proof to uncirculated being determined by public demand.

Margaret Smith would marry future President of the United States Zachary Taylor in 1810. Zachary would spend the next almost 40 years as a career Army officer and Margaret would follow from posting to posting, intent on always setting up a household, even if it was in a tent. She was also known to comfort the wounded soldiers after a battle and counsel soldier’s wives when they were away on assignment.

Mrs. Taylor was not in favor of her husband’s nomination and eventual election as President. Even so, she moved with him to the White House and once again, established the household as she had done at so many Army forts before. The official hostess duties, however, she would leave in the hands of her social daughter, Betty.

Zachary died in office only 16 months into his term leaving Margaret in a state of shock. She passed away a few years later.

Margaret Taylor’s First Spouse coin features a portrait of her on the obverse designed by United States Mint Sculptor-Engraver Phebe Hemphill and sculpted by Sculptor-Engraver Charles L. Vickers. The obverse also contains the inscriptions “MARGARET TAYLOR,” “IN GOD WE TRUST,” “LIBERTY,” “2009” and “1849-1850” (the years she served as the spouse of a president). West Point’s mintmark “W” is also present. 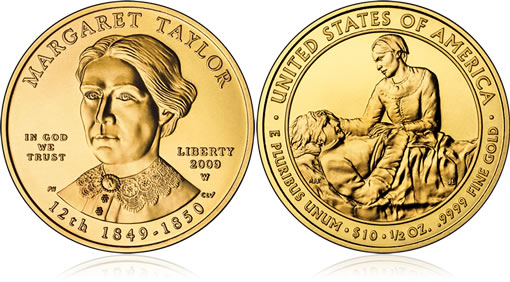 The gold coins reverse contains an image of a younger Margaret attending to a wounded soldier during the Seminole War. Circling the image are the inscriptions “UNITED STATES OF AMERICA,” “E PLURIBUS UNUM,” “$10” and “1/2 OZ. .9999 FINE GOLD.” It was designed by Artistic Infusion Program Associate Designer Mary Beth Zeitz and sculpted by Sculptor-Engraver Jim Licaretz.

An order limit of 10 coins per product option per household has been put in place by the Mint for the first week of sales. Following that week, the Mint will re-evaluate the limit and adjust if needed.

The US Mints Precious Metals Pricing Structure will be used to determine the pricing for each coin which is based on the market value of the gold.

Those interested in Margaret Taylor but unable to justify the gold coin price can purchase a 1 5-16 inch Taylor bronze medal from the Mint for $3.50 each.

The United States Mint, created by Congress in 1792, is the Nation’s sole manufacturer of legal tender coinage.  Its primary mission is to produce an adequate volume of circulating coinage for the Nation to conduct its trade and commerce.  The United States Mint also produces proof, uncirculated and commemorative coins; Congressional Gold Medals; and silver, gold and platinum bullion coins.