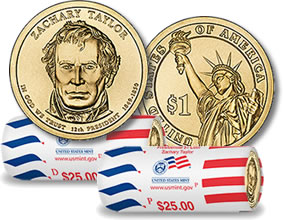 Zachary Taylor Presidential $1 coins in dollar rolls went on sale at the US Mint today at Noon ET. The coins mark the fourth and final release this year of a Presidential Dollar and the twelfth for the series overall.

"The idea that I should become President seems to me too visionary to require a serious answer. It has never entered my head, nor is it likely to enter the head of any other person," said Zachary Taylor when the idea of his running for President of the United States first appeared.

But, after winning the office with 47.3% of the popular vote, Taylor said : "I have no private purpose to accomplish, no party objectives to build up, no enemies to punish — nothing to serve but my country," and that is what Taylor tried to do for his short tenure.

Born into a comfortable farmers family and brought up on the frontiers of Kentucky, Taylor had little time or access to receive much of a formal education, which was not uncommon for the era. Upon reaching adulthood, Zachary joined the Army and shortly received a commission as a first lieutenant from his cousin James Madison (current President of the United States). Continuing to serve with distinction, Taylor climbed the ranks and was instrumental in the defeat of several Native American tribes before being promoted to brigadier general and given the command of the southern division of the United States Army.

Ordered to defend the borders of Texas from Mexico in the mid-1840’s, Taylor would play another instrumental part when the United States would prove victorious in the Mexican-American War. At one point, he even found himself vastly outnumbered with only 6,000 men to Santa Anna’s Mexican armies 20,000. Known as "Old Rough and Ready," Taylor’s military prowess proved too much for Santa Anna, and the latter was forced to retreat. Firmly ensconced as a national hero, political forces moved to nominate Taylor for President, which he won in 1848.

Taylor’s presidential style was very independent, something even his own political party despised. But, after only serving 16 months, Taylor died in office leaving his political legacy in limbo.

The coins honoring the twelfth President of the United States feature United States Mint Sculptor-Engraver Don Everhart’s portrait of Taylor on the obverse along with the inscriptions ‘ZACHARY TAYLOR,’ ‘IN GOD WE TRUST’, ’12TH PRESIDENT’ and ‘1849-1850.’

The reverse was also created by Everhart and is the same design that appears on all of the Presidential $1 coins. It features an image of the Statue of Liberty along with the inscriptions inscriptions ‘UNITED STATES OF AMERICA’ and ‘$1.’

Rolls may be ordered via the Mint’s website at:

Or by calling their toll-free number 1-800-USA-MINT (872-6468). Collectors may also subscribe to the Mint’s Online Subscription Program, and automatically receive future Presidential Dollar rolls as they become available.

Created by Congress in 1792, the US Mint is the Nation’s sole manufacturer of legal tender coinage. Its primary mission is to produce an adequate volume of circulating coinage for the Nation to conduct its trade and commerce. The United States Mint also produces proof, uncirculated and commemorative coins; Congressional Gold Medals; and silver, gold and platinum bullion coins.

what’s the value of a Zachary Taylor one dollar gold coin ?

Generally, they’re not worth more than their face value.