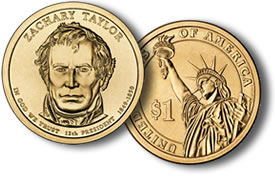 Zachary Taylor Presidential $1 coins were ceremoniously launched today as a part of the events surrounding Zachary Taylor Appreciation Day and the 225th anniversary of his birth.

"Millions of Zachary Taylor Presidential $1 Coins will make their way into the hands of Americans who will see them and remember the life of former President Taylor and his contributions to our country," said US Mint Deputy Director Andy Brunhart. "We are proud to present this coin to the Nation."

Taylor coins were actually released into circulation last Thursday, Nov. 19. On the same day, the US Mint began offering 25-coin rolls from Philadelphia or Denver for $35.95 each. The opening sales for those rolls are already in, with more than 53,000 purchased by collectors between Nov. 19 and Nov. 22. (27,015 from Philadelphia and 26,200 from Denver.) 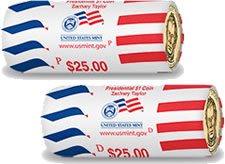 Taylor rolls may be ordered via the Mint’s website at:

"Zachary Taylor was born in 1784 in Virginia. Shortly after his birth, his family relocated to Kentucky, where he spent his youth," the US Mint describes. "Taylor enlisted in the U.S. Army at the age of 23 and acquired the nickname “Old Rough and Ready” during his long military career. A national hero of the Mexican-American War, Taylor was an attractive presidential candidate."

Taylor became the 12th United States President. His presidential style was very independent, something even his own political party despised. After serving just 16 months, Taylor died in office after becoming ill while attending a long ceremony at the Washington Monument on a hot Independence Day in 1850.