Collectors are eagerly awaiting the first sale of rare and exceptional Coins and Banknotes to be presented by Bonhams New York. Taking place on December 3rd, the sale consists of over 400 lots ranging from 1692 to the early 21st Century. 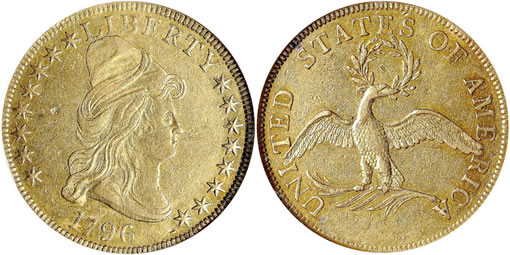 Amongst the most coveted lots will be an exceptionally rare 1796 $10 AU50 NGC (pictured, above). Bright green-gold with warm honey and orange highlights, the coin’s intense mint bloom glows broadly in the fields and within the protected design areas. The obverse is of the Turban Head type with stars to both sides. The reverse motif, also used on the contemporary half eagle, depicts the national bird solidly perched on a branch of palm, holding aloft a victory wreath without any olives or berries.

The die work is excellent being BD-1, Breen-6832, Bass-3174, Taraszka-6, R.4, the only known die pairing for the year. From the earliest years of the regularly issued coinage of the United States which started in 1796, this highly important and elusive issue is estimated at $65,000-75,000.

Another lot certain to lure collectors is a 1915-S $50 Panama-Pacific Round (pictured, below). Considered one of the most desirable of Classic Era commemorative coins, it was originally issued to be sold at the 1915 Panama-Pacific International Exposition held in San Francisco. Due to the fact that most people could not or did not want to spend $50 for a collectible coin during the WWI period, many remained unsold. However, by the 1920s demand for the $50 pieces increased and has continued to grow.

Featuring the helmeted head of Minerva on the obverse and an owl on the reverse, both sides are bathed in shimmering velvet bloom. Close examination of the surfaces yields the presence of an amazingly limited number of defects. This is the largest official coin produced by the United States Mint, and its rarity is a great accident of fate, as most of the unsold pieces were melted down. Estimated at $50,000-60,000 the rarity and importance of this issue, as well as the beautiful quality, make it an extraordinary collecting opportunity.

A 1904 $10 PF64 Cameo NGC is cause for excitement. Although the official proof mintage for this year is recorded to be 108 pieces, survivors are at least as scarce as other dates with noticeably lower mintage figures. A beautiful coin, pristine with warm yellow-gold surfaces, this specimen is notable for deep, watery reflectivity and appreciable contrast for a proof from this era. A very attractive specimen, of a denomination which (as a class) stands as the rarest in the Liberty Head gold series, it is expected to fetch $24,000-28,000.

One of the most classic rarities, always in demand is a 1907 (MCMVII) $20 High Relief – Wire Edge. A beautiful bright yellow-gold with its luster imparted by the dies, there are no signs of handling of any consequence. The leading edge of the wing towers over the field, as does the eagle’s breast. Liberty is walking right off the obverse of the coin, with her flowing gown and staff-like torch blazing forth in glorious golden wonder.

Struck multiple times by the largest medal press available in 1907, the entire coin has a majestic three dimensional quality. Masterfully rendered by expatriate artist Augustus Saint-Gaudens, who passed away before the issue could be coined, it marks a significant peak in design of coinage in American numismatics. This design was created at the behest of Teddy Roosevelt, and is still alive and well almost 100 years later in the American Eagle Gold bullion coins that are produced by the United States Mint today. Carrying an estimate of $20,000-22,000 it is sure to draw serious attention.

An outstanding 1797, Rev of 1797, 1C Stems MS64 Brown PCGS, likely from the Nichols Find, will also be offered. Struck on a slightly rough planchet, with minor shallow areas on both sides, the surfaces are largely rich chocolate-brown with traces of subtle gold and a pleasing satiny luster. A remarkably perfect representative of the type or variety it is estimated at $15,000-20,000.  The fact that a copper coin of the early colonial period is in such pristine condition is extremely rare and notable.

Of particular interest will be an 1853-O $20. With a low mintage of 71,000 pieces, this New Orleans Mint issue is very difficult to locate in any grade. This lightly worn example displays subtle olive-gold color and abundant remaining luster. In terms of overall quality, eye appeal, and preservation this is a premium example of the date. Extremely rare and prohibitively expensive in Mint State, it is expected to fetch $17,500-19,500.

Viewings will begin at the Madison Avenue galleries on December 1st until the morning of the sale which takes place on December 3rd at 1PM. The illustrated auction catalog for the sale will be online at www.bonhams.com/uscoins in the weeks preceding the preview and auction.  For more information about the department, please visit www.bonhams.com/newyork.

Bonhams, founded in 1793, is one of the world’s oldest and largest auctioneers of fine art and antiques. The present company was formed by the merger in November 2001 of Bonhams & Brooks and Phillips Son and Neale UK. In August 2002, the company acquired Butterfields, the principal firm of auctioneers on the West Coast of America.

Today, Bonhams offers more sales than any of its rivals, through two major salerooms in London: New Bond Street, and Knightsbridge, and a further seven throughout the UK. Sales are also held in San Francisco, Los Angeles, New York and Boston in the USA; and Switzerland, France, Monaco, Australia, Hong Kong and Dubai.

Bonhams has a worldwide network of offices and regional representatives in 25 countries offering sales advice and valuation services in 50 specialist areas. For a full listing of upcoming sales, plus details of Bonhams specialist departments, go to www.bonhams.com.