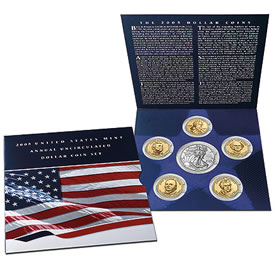 The 2009 Silver Eagle coin cancellations sting many collectors the most following yesterday’s US Mint announcement that it would not offer several long awaited and anticipated 2009 products.

For many weeks now, collector questions, concerns and worry increased about the possibility of this very thing happening — especially to the proof Silver Eagle. The thought of forever having a gapping hole in a 23-year old collection is severely disappointing, but now a reality.

Of interesting note, there is still a means to buy an uncirculated 2008-dated American Silver Eagle directly from the US Mint. One is included in the 2008 US Mint Annual Uncirculated Dollar Set for $37.95.

While the $37.95 price may seem steep, when adding in the five $1 coins, the $17.46 worth of silver (spot price as of this writing), the fact that 2009 sets will not be issued, and then also comparing uncirculated 2008 W Silver Eagle prices on eBay

, the set price suddenly looks much more reasonable than it did last year or most of this one.

As of Sunday, Oct. 4, sales of the 2008 Annual Uncirculated Dollar Set are at 78,908. Weekly sales figures are up by 903, which is better than the three prior weekly sales stats.

The coin sets are available online through the US Mint page:

It would seem logical to assume that the set will not be offered for long. Then again, who would have ever expected a 2008-dated US Mint product to be around late into 2009?