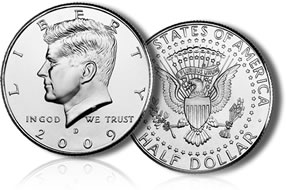 Demand for the 2009 Kennedy Half Dollar has pushed their mintages higher, September coin production and recent US Mint sales figures seem to indicate.

While the US Mint no longer makes Kennedy Half Dollars for general circulation, they do offer circulating strikes in bags and rolls for coin collectors.

Demand has not been blazingly strong for these in past years. In 2008, the Mint struck 1.7 million in Denver and in Philadelphia, for a total of 3.4 million. The amount was sufficient to cover collector purchases with several thousand left over, as the following table highlights:

Maintaining the same 3.4 million level for 2009 made sense, and that is exactly what the Mint did for most of the year. But then Kennedy Half Dollar sales started to outpace those from 2008.

This year’s two-roll sets actually topped 2008 figures back in September. And between August 30 and September 27, another 285,680 half dollars were sold. At that pace, the Mint’s 50c inventory would have been depleted in weeks, leaving them a choice of minting more or listing the products as "sold out."

The latter would not have been the wisest move on the Mint’s part, and not just because they can make money selling more. The Kennedy family history has received notable and very recent attention with Sen. Ted Kennedy’s passing in late August. Then there is the expensive US Mint Fall Gift Catalog with Kennedy Half Dollar products prominently displayed on page 13. Frankly, it would seem a bit off in timing to simply list the dollars as "sold out" during the very time when customers could be the most interested in them.

In the end, the Mint did increase production.

Of note, only Denver levels shifted higher by 200,000 last month. But since Kennedy products are sold with equal distribution of Denver and Philadelphia struck coins, it’s expected that more will be minted in Philadelphia as well.

Why the sudden demand? I’ve been getting the rolls for personal distribution for years but have never seen this high of demand.