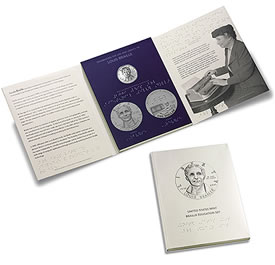 It has been the Fall week for commemorative news from the US Mint. On Monday it added the Lincoln Coin & Chronicles Set to its online store in preparation for an Oct. 15 debut, and it just announced next week’s release of the United States Mint Braille Education Set.

The set includes an uncirculated Louis Braille Bicentennial Silver Dollar with special packaging that has genuine Braille text — a first time event for the US Mint, much like the silver dollar is the first ever coin with readable Braille.

The set will be issued Thursday, Oct 8, at noon Eastern Time for a price of $44.95. Sales are limited to a maximum of 25,000 and a further order limit of one (1) per household will be enforced.

These limits invite the question, will the education set sell out? The previously mentioned Lincoln Chronicles Set has a 50,000 max limit. Many expect those will fall to collector demand on the first day of issue. There is supportive reasoning. Lincoln silver dollars sold out earlier in the year to the tune of 325,00 proof and 125,000 uncirculated. That happened in just over six weeks. 50,000 actually had to be held in reserve for the chronicles set.

The story is different for the Louis Braille Silver dollars, which commemorate the 200th anniversary of the his birth. They are still available and have been since March 26, 2009. The latest US Mint sales figures (as of 9/27) show 122,661 proof and 65,716 uncirculated have been purchased by collectors. While very respectable, they are dull compared to the Lincolns.

The US Mint Braille Education Set is unique, however. Packaging may indeed increase demand despite the collector’s mantra that a coin, not its surroundings, is the appeal. The uncirculated coin alone may be purchased for $33.95 — by itself or within an easy-open capsule. $11 more gets the coin, educational material, and genuine Braille text. Minimally, the set is a better gift item and more impressive to the younger collector than the single coin. The 25,000 limit is also more appealing as a "bullet item" when reselling.

The included uncirculated dollar is also more scarce, although actually closer to its proof counterpart than other typical commemorative series. (Check out the ratios between the Lincoln coins as an example.)

Finally, it would seem logical for a large percentage of collectors who already own one of the coins to seriously think about purchasing the set as well. And that base is not insignificant.

In this collector’s opinion, there is a better than 50 percent chance that the Braille set will eventually sell out.

When available, the Braille Education Set can be ordered directly from the United States Mint Web site at http://www.usmint.gov/, or directly here.

Surcharges from the sale of Braille coins are authorized to be paid to the National Federation of the Blind to further its programs to promote Braille literacy.

Born in France, Louis Braille lost the sight in his left eye at the age of three from an accident with a tool in his father’s workshop. An infection spread to his right eye, and by the age four he was blind. Braille went to the the Royal Institute for Blind Children in Paris, where he learned to read from large letters imprinted on paper.

Unhappy with this system, Braille designed a new one based on night writing shown to him by Charles Barbier de la Serre, a captain in Napoleon’s army. Louis Braille used 6 dots in 2 columns to represent letters in the alphabet. This code punched into paper can be read by feel, and is the essence the Braille system still in use today.

The obverse or heads side of the commemorative coins feature a portrait of Louis Braille. The reverse depicts a child reading a book in Braille with the word BRAILLE (abbreviated BRL in Braille code) above him. The word INDEPENDENCE is featured on a bookshelf behind the child.

[…] for modern commemorative silver dollars. 25,000 of the uncirculated coins were reserved for the Braille Education Set which was issued by the Mint on October 8, 2009. document.write('' […]