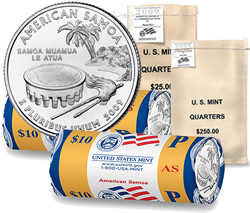 American Samoa quarters are the fourth of six coins to be issued in the 2009 District of Columbia and U.S. Territories Quarters Program, and they are notably the most scarce quarter-dollar in years.

Despite that, they are not the most sought after by collectors. They rank #3 in 2009 sales after Guam and Puerto Rico quarters.

If the United States Mint follows its own precedent, it will stop selling rolls and bags of the American Samoa quarters on Monday morning with the launch of the next commemorative in the series (the US Virgin Islands quarter). Is now the time to buy? Reviewing 2009 quarter mintages and recent sales figures may help answer that question.

To date, production levels have fallen with successive quarter issues. It’s not due to a lack of desirability for newer quarters, but a simple matter of economics. As discussed before, during tough times consumers spend instead of hoard loose change. In effect, the public is supplying the banking system with money instead of the other way around. With demand for replacement coins down, the US Mint is forced to cut production.

Has the economy sufficiently turned the corner for quarter production to pick up? The release of the US Virgin Islands production figures will be telling. However, those are not expected to be published until early Oct. and US Mint sales of American Samoa quarters in bags and rolls will (likely) have long been halted.

Right now, the known factor is that American Samoa quarters have the lowest mintages. Not only for this year, but for dozens of years. Denver figures in particular, stand out.

*American Samoa sales as of Sept. 20

As the above table shows, Puerto Rico quarter bag and roll sales spiked. They were launched around the time it became clear coin production was severely constrained. (See 2009 Quarter Production Plunges.) Coin collectors took note and grabbed at the opportunity to own coins with lower mintages.

With the dust settled since, circulating quarter product sales have retreated despite declining mintage levels.

Looking at both tables together, the most attractive quarter, as in most scarce and less sought after, is the 2009-D American Samoa quarter. It has the lowest mintage at 39.6 million, with the next in the tier 3 million higher. Additionally, current sales show they are virtually sharing the bottom ranking.

For a perspective of how no longer US Mint sold 2009 quarters are doing in the secondary market, here are several eBay links:

[Editor’s update: As expected, the US Mint stopped selling the American Samoa quarter bags and rolls with the release of the US Virgin Islands quarter-dollar.]