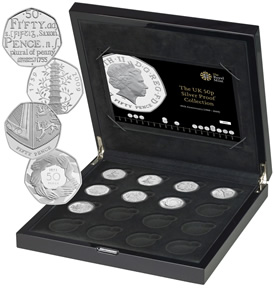 2009 marks 40 years since the introduction of the UK’s most distinctive circulation coin – the 50p piece.

To mark this defining moment in British currency, The Royal Mint is proud to make available for the very first time a 16-coin silver Proof set celebrating the many commemorative designs to have graced the coin.

The 50p coin replaced the ten-shilling note in 1969, joining the 5p (shilling) and 10p (florin) coins in circulation to leave only the three copper coins to be introduced in February 1971 to complete the new series of decimal coins. While the original reverse featured Christopher Ironside’s traditional Britannia design, the new coin’s equilateral curve heptagon was unequivocally revolutionary as the world’s first seven-sided coin.

Over the last 40 years the 50p coin has celebrated a number of important occasions in British and European history. The new Royal Mint UK 50p Silver Proof Collection showcases the 16 distinctive designs to have appeared on its reverse to date, including the coin’s first ever commemorative design marking the UK’s accesion to the European Economic Community (EEC) in 1973.

Dave Knight, Director of Commemorative Coin, comments: "Since its introduction in 1969, the 50p has become synonymous with marking significant events in the UK, as well as European history and culture. We are delighted to bring together the whole range of celebratory designs for the very first time in this prestigious silver Proof set."

The introduction of the 50p coin in 1969 magnificently fused traditional design with revolutionary shape, successfully creating a bridge between the UK’s old coinage and new decimal system. The coin’s shape made it easily distinguishable from round coins, both by feel and by sight, while its constant breadth allowed it to roll in vending machines.

The UK 50p Silver Proof Collection comprises 16 unique 50p coins struck by The Royal Mint in sterling silver to Proof quality. The coins are all dated 2009 and bear the current numismatic portrait of Her Majesty The Queen created by Ian Rank-Broadly FRBS.

Hello, i have a coin that my grandfather gave me that looks similar to some of these. And he told me to keep it safe and protected because its very valualbe. I have no clue what it is or how much i can get from it. But i simply do not want the coin anymore. It puts sadness in my heart. Will you buy it from me or help me?

what does this coin look like do u have a picture???