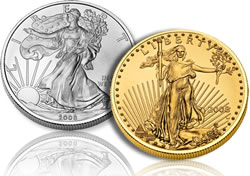 In a switch from recent months, bullion American Gold Eagles are off to the races in September while their counterpart Silver Eagles appear winded.

Both were slow out of the blocks, as the US Mint posted the first September figures only on the 9th. (The Labor Day holiday may have contributed to a delay.) But then Gold Eagles blasted off.

With just half of the month gone and 15 days still left on the books, an already 62,500 have been sold to the US Mint’s authorized dealers. In contrast, 86,000 were sold in the entire month of July. 82,000 in all of August. Of course in those months gold didn’t head up and leap over the $1,000 an ounce mark like it has this month.

As far as Silver Eagles, their September sales figures are NOT impressive considering how they’ve performed already this year and taking into account how silver prices have shot up to $17 an ounce following a mid $14 level at the end of August.

The US Mint shows 600,000 have been purchased as of the 15th. Comparing the same July and August months as before, a respective total of 2.81 million and 2.13 million were sold. (Silver Eagles had their best August ever.) September’s eagle pace will need to pick up and kick into second, third, or maybe even fourth gear just to show respectable numbers by comparison.

With all this in mind, by the end of the month there is still a good chance the eagles will step up on the podium an receive honors for scoring the top sales of any year. That’s how strong sales have been in the prior months. 19,364,500 of the Bullion Silver Eagles have been sold in 2009 as of Sept. 15. US Mint sales tables show 19,583,500 were sold in all of 2008.

The US Mint sells bullion coins, which are "non collector" versions, only to its authorized purchasers who then sell to dealers and/or directly to the public. With that, some give and take and delay should be placed into the equation for judging "today’s demand" given that only the US Mint sales numbers are on hand.

The above sales figures were pulled from the US Mint’s website at: