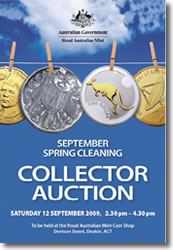 The Royal Australian Mint is holding a September Spring Cleaning Collector Auction, marking the first time it has held such an event.

Set for September 12, 2009, the auction will occur at the Mint’s location on Denison Street in the Deakin suburb of the Australian Capital Territory. Registration for the event will start at 2:30 PM and continues until 3:10 PM.

The auction itself is set to begin promptly at 3:15 PM.Only registered bidders will be allowed to participate.

The items slated to be sold make up quite an eclectic collection; from multiple coins to framed posters to information panels.

Some of the unique items that will be auctioned off are included below (taken from the Mint’s Catalogue – PDF link):

Lot 54 – Information Panel – Growth – history of the mint and what it does in Good Condition.