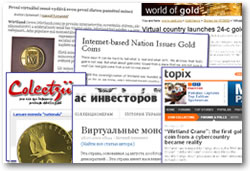 Last month Wirtland released the "Crane" – the world’s first physical gold coin from virtual land. The birth of Wirtland Crane was widely covered by international media (see list below). Though most of publications are in English, we have spotted also articles in Romanian, German, Russian, Ukrainian, and Czech media.

"I received the Wirtland 10 ICU, and I really think it’s a gorgeous coin!" said Erik V. McCrea, coin collector, who was the first buyer of Wirtland Crane (see photo below). "The Wirtland Crane is truly a work of art! And that is what I value the most – top-notch artistry combined with numismatics."

Erik, who is a painter, teacher, and collector of unusual coins from USA, tells his story: "I basically began collecting coins because my father had traveled a great deal as an engineer. For years to come, my main goal was to get at least one coin from every country.

After all, it was getting harder and harder to find coins from ‘new’ countries. But in the mid-to-late 1990s, I began to be interested in the types of coins featured in the catalogue ‘Unusual World Coins’. Many of those coins brought back the thrill and the excitement about this hobby."

Tom Havelka, another owner of Wirtland Crane: "My Wirtland coin is absolutely beautiful! It will make a fine addition to my collection of coins from unrecognised states, and it is the first gold coin I have in that collection. Congratulations on a wonderful addition to the numismatic world!"

Sale of Wirtland Crane already has been spotted on eBay, which means the popularity of the coin is growing.

The price of Wirtland Crane is currently 135 US dollars for collectors and 120 US dollars for gold investors, who purchase 10 coins or more. Shipping cost is always 5 US dollars, a flat rate for any country and quantity of coins. 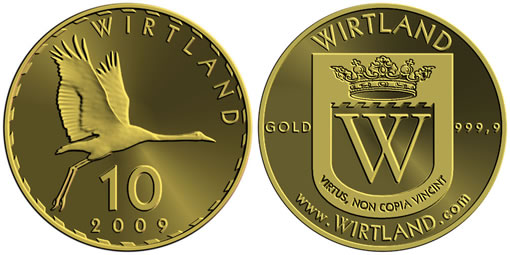 How competitive is Wirtland Crane in comparison with other gold bullion coins? In weight and gold purity the Wirtland Crane is similar to Canadian "Gold Maple Leaf". Its retail price is $133.95 at Nwtmint.com*, plus standard shipping cost $20 within USA. Other popular 1/10 ounce gold coins, like South African Krugerrands, have lower percentage of gold (22 carats, or .917 gold).

A purchase of ten pure .999 gold coins including delivery will cost: $1360 for Maple Leafs from Nwtmint.com, or $1205 for Cranes from Wirtland’s mint. The buyer saves $155 in Wirtland. Regarding discounts for wholesalers and other details please email Mint (at) Wirtland .com.

The Wirtland’s "crane family" will grow. The next coins will be 1-ounce silver and 1-ounce gold Wirtland Cranes.

Wirtland (www.Wirtland.com) is the first internet-based sovereign state, an experiment into legitimacy and self-sustainability of a country without its own soil. Wirtland was founded on August 14, 2008 as a public initiative. Its population is currently approximately 700 citizens from all five continents. It is represented through its official website http://www.Wirtland.com, its social network http://www.Wirtland.net, and “The Times of Wirtland” at http://wirtland.blogspot.com.