US currency may get new designs to make them more identifiable to the blind and visually impaired, but implementing changes could cost billions of dollars, a new study reveals. 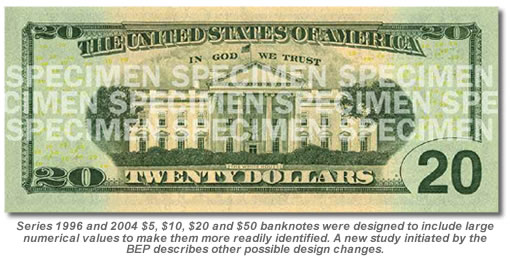 The Bureau of Engraving and Printing (BEP) announced that it initiated and has received a comprehensive report entitled Study to Address Options for Enabling the Blind and Visually Impaired Community to Denominate U.S. Currency.

"This study is the next step in providing meaningful access to currency for the blind and visually impaired," said Larry R. Felix, Director of the BEP.

The report, which the BEP received on July 28 and made available to the public on August 7, consisted of three phases:

The Bureau, along with the Department of the Treasury and the Federal Reserve, are expected to deliberate on the study findings, issue their respective recommendations and seek public input to help determine the best direction(s) to take.

Upon completion of the public comment period, the final recommendations will be forwarded to the Secretary of the Treasury who has the authority to determine if and what changes will be made to US currency. Note designs are routinely updated every 7 to 10 years, but it is not certain when any changes for the blind and visually impaired would be implemented.

Earlier efforts by the U.S. government to improve the currency to help the public more readily identify differing denominations included new designs made in 1996 and in 2004 to feature larger, high-contrast numerals on the back of the notes and the inclusion of a machine-readable feature with the Series 1999 currency.

These efforts should have been undertaken long before now. Most other countries have implemented these changes and their blind and visually impaired residents have benefited from them. And don’t let certain advocates in the blindness community tell you that these changes are not necessary, or that a money identifier is a sufficient alternative. Make the changes which are long overdue and very much a key part of providing independence to our community.