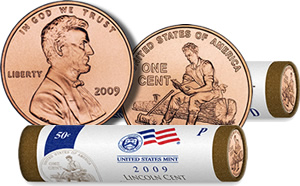 On the eve of the third Lincoln cent launch, the United States Mint has stopped selling penny rolls of the second issued 2009 Lincoln coin design known as the Rail Splitter, or the Formative Years cent.

Visitors to the Mint information page for the rolls now see the words "Sold Out" in bolded, red font.

The two-roll sets with 50 coins from Philadelphia and 50 coins from Denver went on sale May 14 for $8.95 each. The latest US Mint sales report shows 300,246* were purchased by collectors as of Sunday, August 9.

For reference, 96,000 two-set rolls of the first 2009 Lincoln birthplace or log cabin coin designs were sold, but the Mint also unexpectedly stopped selling them within two weeks after release.

Thursday, August 13, is the Lincoln Professional Life Cent launch day. The US Mint officiates a release ceremony in Springfield, Illinois and will also offer Professional Life penny rolls for the same $8.95 price.