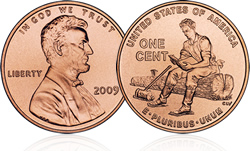 The United States Mint on Tuesday officially announced the release date for two-roll sets of the newly designed Lincoln Cent Formative Years — the second of four pennies to launch in 2009.

The set is priced at $8.95, plus $4.95 for shipping and handling, and will be available at noon ET on Thursday, May 14. There is an order limit of five sets per household.

Like the Lincoln Log Cabin rolls released March 13, the latest offering will includes a roll of 50 coins from Denver with the “D” mintmark and another roll from Philadelphia, where the coins do not carry mintmarks.

"Each roll of coins in the two-roll set is packaged in specially designed paper coin wrap displaying the mint of origin, the year and the face value of its contents," according to a Mint statement.

The second of the designed 2009 Lincoln Pennies portrays a young Abraham Lincoln educating himself while taking a break from working as a rail splitter in Indiana. Inscriptions include the UNITED STATES OF AMERICA, E PLURIBUS UNUM and ONE CENT. It was designed and sculpted by United States Mint Sculptor-Engraver Charles Vickers.

Finding 2009 pennies in circulation has been a difficult task in most parts of the country. As such, the first US Mint offered Lincoln cent rolls sold out within two weeks, despite having a total mintage of 96,000 and what many considered as having a rather large premium. Those same rolls are now selling for substantially higher in the secondary market. It is extremely likely this latest release will sell out in short order as well.

I never saw (any) of the first new reverses yet. How aboutr getting them in to circulation for the mutual good of the collector base as well as the economy!!

i got a lot of those in circulation, about 10, but the birthplace, only 2