The standout highlight of the auction was lot 1018, a Condition Census 1796 Small Eagle Quarter, B-2, Rarity-3, graded MS-64 by PCGS and realizing an impressive $103,500. An issue that enjoys strong and unflagging demand among type collectors, the 1796 is the first Quarter struck in the United States Mint and the only one of the Draped Bust, Small Eagle design. 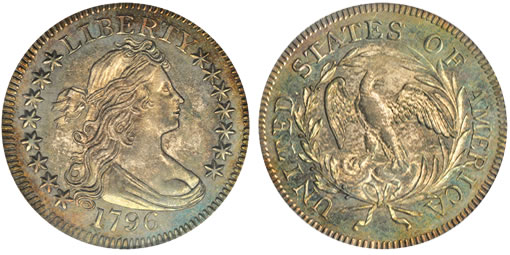 Two die marriages are known, of which the High 6 B-2 combination is the more plentiful in numismatic circles. "Plentiful" is a relative term in this context, for the 1796 as an issue is a scarce coin when viewed in the wider context of U.S. numismatics. Mint State coins are rare, and they can actually be described as very rare from a market availability standpoint. Indeed, most high-grade examples are in tightly held collections and trade only once in a long while, with this prime example logged in with a PCGS Population (both die combinations) of only 7 with 8 finer through MS-67, yielding an exceptional realization. 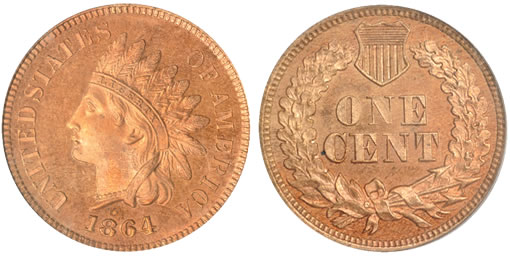 A legendary and well-known rarity in the proof Indian Cent series, the 1864 L on Ribbon has an estimated mintage of just 20 pieces. The discovery piece for the Snow-PR3 die marriage remains unique, and it was returned to Bowers and Merena for the 2009 Los Angeles ANA Auction after appearing in the sale of the Herman Halpern & Gerald O. Warner Collections, in March 1997 at lot 232. 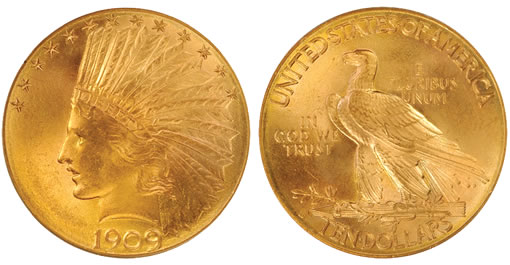 Currency made an outstanding showing as well, topped by lot 3216, a Rare $100 California Gold Bank Note, San Francisco, CA, $100 1870 Fr. 1162, The First National Gold Bank, Charter #1741, PMG NET Choice Fine 15, Restoration, which realized an extraordinary $207,000. Considered to be one of the greatest National Bank Note rarities of all time, this $100 Gold Bank Note from charter #1741 San Francisco is one of only eight known examples in private hands and three of the Friedberg number, this being equal to the third finest.

World and ancient items did extremely well in the auction over two dedicated sessions, realizing more than $2.3 million.

"We presented some really outstanding lots in this auction, and judging from the lot viewing traffic and the activity of the two live floor sessions, the interest level was quite high and very enthusiastic," said Richard Ponterio, executive vice president of Bowers and Merena and founder of Ponterio & Associates.

"We are reaching the whole world with our sessions, many collectors in their home countries looking for coins that represent them and their collections, whose own economies may allow them more purchasing power during this time."

The eyes of the world were on several key lots, especially lot 8701, a unique Poland Second Republic Gold Constitution 5 Zlotych that realized $132,250. According to the Parchimowicz catalog of Polish coins, there were a total of no more than four Constitution 5 Zlotych struck in gold, comprised of 3 different varieties: this 81 Pearl, a 100 Pearl, and two 100 Pearl with raised initials "SW," "WG," and the date "3/V." Believed to be UNIQUE as stated by catalogers at Sotheby’s, CNG and Stack’s when previously sold at auction and purported to be the only gold Constitution in private hands. This piece is of the highest rarity and utmost importance with an impeccable and impressive pedigree, and was auctioned for well above catalog estimate.

Also garnering worldwide attention for weeks leading up to the auction was lot 8666, an attractive Manen Oban 10 Ryo with original inking in Extremely Fine condition that realized $43,700. A beautiful specimen, it is the only type that was produced using machinery. In addition, lot 8190, a scarce Lebanon 5 Livres realized an astonishing $23,575 after a session of highly spirited floor and phone bidding during the live auction. This coin catalogs for $250 in the current Standard Catalog of World Paper Money.

The spotlight collection of the world sessions was The Kent M. Ponterio Collection of the Coinage of Mexico Struck During the Reign of Charles and Johanna, a collection of about 100 lots that enjoyed a 98 percent sell-through. It was originally assembled as a numismatic study collection focused on assayer and mint mark combinations, and contains many pieces that largely contributed to the proper cataloging of the series, as well as the radical reassignment of assayer sequencing.

Prices realized for all lots in the Bowers and Merena Official Auction of the ANA Los Angeles World’s Fair of Money are available online at www.bowersandmerena.com. Bowers and Merena’s next auction will be the Official Pre-show Auction of the Whitman Coin & Collectibles Philadelphia Expo scheduled for September 21-23, 2009. Complete lot viewing and auction schedules are available at www.bowersandmerena.com, and U.S. catalogs will be available in print and online by early September.

For more information about Bowers and Merena’s Official Auction of the ANA Los Angeles World’s Fair of Money in August, call 800.458.4646.  For media inquiries, ask for President Steve Deeds. Complete prices realized for all past auctions are available at www.bowersandmerena.com.