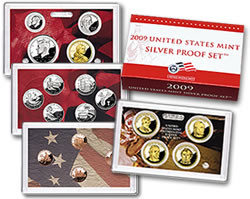 US Mint 2009 Silver Proof Set sales were roaring mad during the first three days of release — despite their $52.95 price tag.

271,372 were sold between their noon launch on Friday and up and through to Sunday, new US Mint figures reveal. Sales surged passed the same year six quarters silver proof set by more than 56,000. And those were issued several months back on March 23.

Demand looks to be paralleling the similar inaugural sales pace of the non silver 18-coin 2009 Proof Set. 437,178 of these were sold during the first seven days. (851,097 have been purchased as of Sunday.)

As another comparative barometer, the no longer sold 2008 Silver Proof Set has Mint reported sales of 774,874. The new sets look like they are on a mission to explode past this figure, irregardless to the fact that sales will taper down after the initial launch excitement subsides.

The pull of the sets four newly designed Lincoln pennies is strong as each is struck in 95% copper, 3% zinc and 2% tin to match the original issued 1909 penny. The desire to own the 90 percent silver dime, half-dollar, and six quarters is perhaps more compelling, since the set is the only way to acquire them. At today’s silver price, the non numismatic, intrinsic silver value of these coins alone are worth more than $20.

For more information and where to purchase the set, read the CoinNews 2009 Silver Proof Set article.

people are breaking open these sets to sell the silver dime and half dollars.