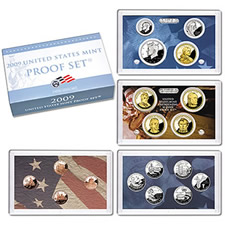 2009 US Mint Proof Set sales were on fire during their inaugural launch week.

While the annual sets are always exceedingly popular, the latest one took the Mint by storm. Amazingly, 437,178 of the sets were sold from Monday, June 1, to Sunday, June 7.

The high volume was not without consequences. Most collectors who ordered during the opening hours needed a booster shot of patience.

Purchasing the proof coins online was like waiting for store doors to open on Black Friday morning. But much worse for the Mint, tens of thousands of collectors were trying to rush through their store front in a matter of hours. The jam caused long wait times and forced the Mint to briefly shut down online sales to… dare we say, reboot?

Whatever occurred behind the scenes, once the green light to open orders was given again, everything seemed to flow smoother. Following, this collector purchased his sets in mere seconds.

The draw of the once in a lifetime bicentennial Lincoln pennies is simply too strong to ignore. Four newly designed proof cents, with each composed of the matching alloy of the original 1909 Lincoln cent — 95% copper, 3% zinc and 2% tin. Throw in 14 more coins. Then price the package at $29.95.

What more can a collector ask for?

Did anyone receive someone else’s Proof Set order like I did? I’m sending mine back so they can straighten this out.

i got the 2009 proof set and one of the pennies has no mint mark what is the value of this set and how many others are out there with one penny with no S mint mark?

I just received 3 Sacagawea Dollars. The first order was for a P and D. When I received them there no mint marks and the date was missing. Two days later the proof arrived and guess what–there was no S or date. Help–Has anyone had a similar experience? Tom

The date and mint mark are on the edge…..Like the Presidential $1 Coins, the Native American $1 Coins maintain their distinctive edge and golden color and feature edge-lettering of the year, mint mark and the inscription E PLURIBUS UNUM.

the proof set package is cheap the plastic cases are super easy to open.just stick your finger nail on the connor and pull with almost no effort.