(Irvine, California) – A 1907 Rolled Edge Indian Eagle, a gorgeous and conditionally rare representative of this classic issue in the 20th century gold series, will be offered in Bowers and Merena’s Official Auction of the American Numismatic Association World’s Fair of Money® at the Los Angeles Convention Center and online, August 5-8, 2009, with lot viewing August 1- 8. 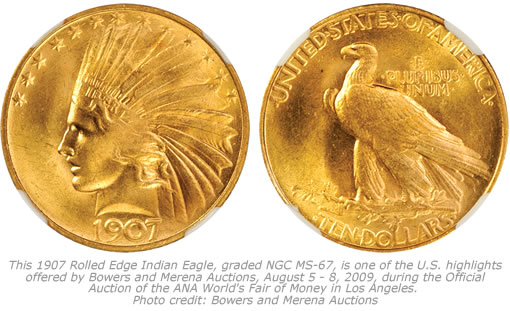 Listed in the auction catalog as 1907 Judd-1903 (Judd-1775), Pollock-1997, Rarity-5, Rolled Edge, it is described as "a bright, satiny piece" with a strike that is "characteristic of the issue, meaning that it is bold-to-sharp elsewhere yet noticeably soft in the center of the obverse." The example boasts a Condition Census MS-67 Grade from NGC with a combined PCGS and NGC Population of just 6, 0 finer.

"This is one of only 42 potential examples to have survived the melting of the issue at the Philadelphia Mint, and three of these survivors are known to be in the Smithsonian Institution," said Steve Deeds, President of Bowers and Merena (www.BowersandMerena.com).

"It is very infrequent for any of these remaining specimens to appear at auction, so we fully appreciate how special it is to be able to present coin this coin to our bidding audience."

The unique specimen striking of the 1854 Kellogg & Co. $20 Gold coin is graded PCGS Specimen-69 and is described in the auction catalog as "possessed of awe-inspiring eye appeal" with a strike that "is 100 percent complete over all the elements of the design." 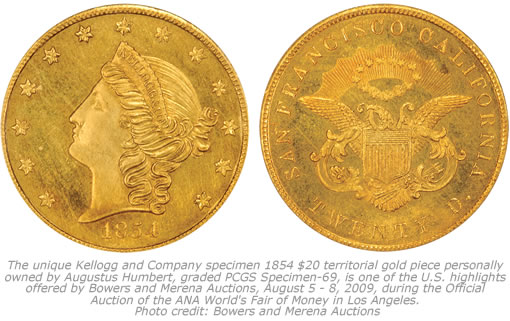 "This is the single most important twenty-dollar gold piece issued by Kellogg & Co.," said Deeds. "It was struck on February 9, 1854, and given by John Glover Kellogg to Augustus Humbert, his friend and future business partner.  It later was a highlight of the legendary Garrett Collection at The Johns Hopkins University in Baltimore for decades."

The auction also includes other rare or even unique United States proof and pattern coins with impressive numismatic pedigrees.

Other highlights of the auction are:

"The annual ANA conventions are among the most important numismatic events in the world, and we want to offer collectors and dealers a wide range of outstanding coins and bank notes as part of the ANA’s Official Auction," said Deeds.

Additional highlights in the Bowers and Merena Auctions Los Angeles sale include:

The ANA World’s Fair of Money, August 5 – 9 in the Los Angeles Convention Center West Hall A, features more than 1,000 dealers, a Museum Showcase with a special exhibit of national treasures from the Smithsonian Institution, mints from around the world and a variety of educational programs and family activities. For more information, visit www.WorldsFairofMoney.com.