(Lincroft, New Jersey) — The top-rated sets of Capped Bust and Liberty Seated half dimes in the PCGS Set RegistrySM have been sold in a multi-million dollar private sale by Legend Numismatics of Lincroft, New Jersey (www.LegendCoin.com). 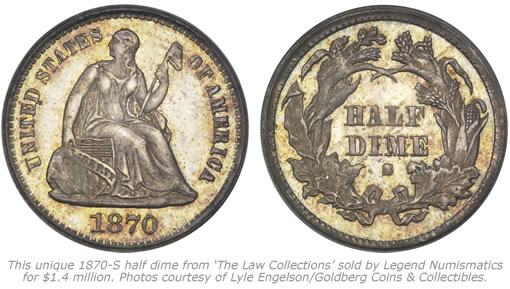 The 93 coins include many of the finest known examples and the unique 1870-S half dime that was individually valued in this transaction at $1.4 million.

"The collections are known as ‘The Law Collections,’ named after the anonymous ‘Law Collector,’ a New Jersey hobbyist who sold the coins to us for $2.2 million," said Laura Sperber, President and Founder of Legend.  "We then sold both sets intact to a Western states collector who told me he would like to exhibit the 1870-S and other coins from his extensive collection, perhaps at an ANA convention next year."

"The buyer is especially excited about the mint state Liberty Seated half dimes because they will compliment his collection of proof half dimes," Sperber explained.

The Law Collections of half dimes comprised a total of six different categories that are each ranked number one in the PCGS Set Registry:

This is the only complete set of Liberty Seated half dimes possible since it includes the unique 1870-S, the only coin not in the legendary Eliasberg Collection.  Baltimore banker Louis E. Eliasberg Sr. assembled virtually one example of everything struck by the United States before his death in 1976.  The 1870 San Francisco Mint half dime was not discovered until 1978 when it was reported to the hobby by Rare Coin Company of America (Rarcoa) in Chicago.

The coin is graded PCGS MS-64.

"These sets have been a 16-year labor of love.  It took a great deal of time, but it was tremendous fun and I loved putting them together," said the "Law Collector" who began collecting half dimes in 1992.

"I was at a show in Secaucus, New Jersey when I saw three Seated Liberty half dimes in (MS) 68.  They were the most beautiful coins I’d ever seen, absolutely gorgeous, and I bought all three.  Over the next 16 years Laura (Sperber) located about 95 percent of the rest of the coins for me, including the ’70-S.  When the ’70-S became available (in 2004) I had real visions of putting together the ultimate set, and I finished it in 2008."

The Law Collector said he would miss the sets, but added: "I’m glad they didn’t get broken up and scattered to the wind.  These are museum pieces.  I’m glad they’re going to a collector who appreciates them and will keep them together as sets."

PCGS President Don Willis stated: "The Law collections are an impressive accomplishment.  Each collection ranks number one in the appropriate PCGS Registry Set and includes many finest known examples.  Of course, the inclusion of the unique 1870-S half dime is an achievement beyond comparison."

"There are incredibly high-grade coins in these two collections, and many of them have CAC (Certified Acceptance Corporation) stickers on the holders.  "Fifteen coins are graded PCGS MS-68," said Sperber.

"I was flabbergasted at the quality.  These are fabulous coins that combine rarity and beauty.  It takes a lot of patience to assemble sets like these, and they can’t be duplicated," Albanese said.

For additional information, contact Legend Numismatics toll-free at (800) 743-2646 or visit online at www.LegendCoin.com.

I have an 1870 dime with lady liberty on one side and III surrounded by what looks like wheat sheaves on the other side. Is it worth anything?
thanks

What you have is a nickel 3 cent coin, which were minted from 1865 to 1889 (mailing a letter cost 3 cents, so it seemed logical to have such a coin). The mintage was 1.3 million, which puts it towards the lower end of the spectrum (but there were many much lower). So it has some value, but is not particularly scarce, and this series is not widely collected, thus making the demand–and price–much lower than, say, an Indian head cent of such mintage. If it is in near-perfect condition it is worth much more than a worn, or even… Read more »

I have a half dime with the image of lady liberty on one side but on the other side the is F A written on the back. what can you tell me about this.