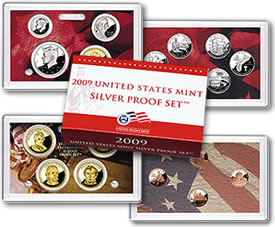 The US Mint on Friday launched the 18-coin 2009 Silver Proof Set for $52.95. The annual set is a favorite with collectors, highlighted by the no longer available 2008 Silver Proof Set with sales of 774,874 as of Sunday.

The 2009 set is actually $8 more than last year’s offering, but it also includes an additional silver quarter and four bicentennial 2009 Lincoln cents specially struck in 95% copper, 3% zinc and 2% tin — the same alloy used in the original 1909 penny.

Similar to the fast-selling 2009 clad proof set that was issued by the Mint in June, the silver set contains collector proof versions of circulating 2009 coinage. All coins bear the "S" mint mark denoting they were minted at the United States Mint in San Francisco. Additionally, the dime, half-dollar, and six quarters are struck in lustrous 90 percent silver. The set has an intrinsic silver value of $19.99 at Friday’s silver spot price of $13.16 an ounce.

The following 18 coins are included in the set:

What are proof sets? As described by the Mint, they are:

"Proof coins are extraordinarily brilliant, with sharp relief and a mirror-like background. Their frosted, sculpted foregrounds give them a special cameo effect. Proof blanks are specially treated, polished and cleaned to ensure high-quality strikes. The blanks are then fed into presses fitted with specially polished dies and struck at least twice to ensure sharp relief."

No limits are in place and ordering is available directly on the US Mint page:

The Mint indicates domestic orders will include a $4.95 shipping and handling charge.

[…] annual sets are a popular offering. The Mint’s latest unaudited coin sales figures for the 2009 Silver Proof Set came in at 694,406. A reason collectors purchase them is to acquire the Roosevelt dime and Kennedy […]