Puerto Rico Official First Day Coin Covers are now available at the US Mint for the price of $14.95, plus $4.95 for standard shipping and handling.

This year the production run is limited to 25,000, which is down from the 35,000 issued in prior years. The cover includes two Puerto Rican Quarters with a reverse design featuring a sentry box in Old San Juan overlooking the sea and Puerto Rico’s official flower, the hibiscus.

The design, by United States Mint Sculptor-Engraver Joseph Menna, also includes the inscriptions Isla del Encanto (Island of Enchantment), making it the first U.S. coin to circulate with a phrase in Spanish.

The display card housing the two quarters includes a cancelled 42-cent Flags 24/7 stamp and a postmark of March 30, 2009, San Juan, PR., marking the day the quarters were released to the public. (They were ceremoniously launched into circulation April 2.) One quarter is from the Mint’s Denver facility while the other was struck from Philadelphia.

The Puerto Rico quarter is the second of six coins released in the 2009 District of Columbia and U.S. Territories Quarters Program. The other five quarter-dollars commemorate the District of Columbia, Guam, American Samoa, the U.S. Virgin Islands and the Commonwealth of the Northern Mariana Islands.

2009 quarter production has plunged, with only 139,200,000 of the Puerto Rico quarters minted for circulation. While the figure may seem high, it is a mere shadow compared to any of the state minted quarters. 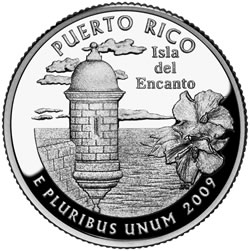 Orders may be placed online at the U.S. Mint page:

Original Mint artist renderings and descriptions for each quarter may be found at 2009 Quarter Design Images. Additional quarter program information is provided by the Mint here.

In related quarter news on Tuesday, the US Mint began issuing Guam quarters in bags and rolls.